The Mets (21-27) dropped their third straight on Tuesday evening with a 4-1 loss to the division-rival Phillies in the first of a three-game series at Citizens Bank Park. They are now 2-6 against Philadelphia this season.

Despite New York’s sizable offensive numbers season, the club has fallen to a season-low six games below .500 as they continue to show a lack of fundamentals in clutch situations. They notched 11 hits tonight but produced just one run, going 0-for-6 with runners in scoring position. The club left 12 on base and hit into two critical double-plays in the sixth and seventh inning that would be the deciding factor of the loss.

With just a dozen games left in the season, the team sits two and a half games out of a wild card berth.  For all of the chances, there have been missed opportunities and it may very well be too little, too late for the 2020 Mets. (Box Score)

Rick Porcello took the mound for New York on Tuesday evening. The 31-year-old tossed six innings, allowing four runs on six hits with two walks and five Ks. He took the loss and now owns a 1-5 record on the season.

Porcello, who has struggled in the opening frame this year, had a 1-2-3 first.

The right-hander gave up his first hit to Didi Gregorious, who knocked a leadoff single to center in the second. Jean Segura then reached on a forceout with Gregorious out on the play. With two outs, Andrew Knapp singled for first and second but Porcello stranded the pair with his second strikeout of the frame. 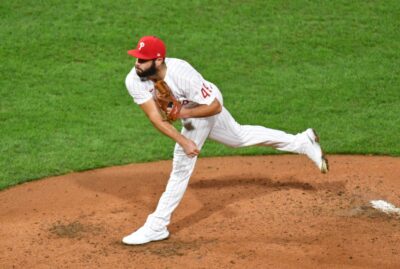 New York’s starter settled into his groove and tossed just seven pitches in the third with nothing across for Philly.

He then got his first two outs of the fourth with just four pitches. Philly rallied with two outs to load the bases on a pair of walks to Segura and Knapp, with a Scott Kingery double in between. They took the lead with a two-run pinch hit single by Adam Paisley to make it 2-0 with runners on second and third. Roman Quinn then hit a fly ball to right that could’ve made things a lot worse, but a diving catch by Conforto saved a couple of runs to limit the damage and close out the frame.

In the following inning, Porcello again got into trouble after retiring his first two batters. Alec Bohm reached base on a single after a ground ball to J.D. Davis knocked his glove off. The defender was able to recover it and make a tremendous barehanded throw to first, but it was not in time. Gregorious then got the best of a first pitch cutter, sending a fly ball out of right field for a two-run homer that made it 4-1, Phils.

Porcello got out of the sixth with four pitches. He ended his night after tossing 94- 66 of them for strikes.

Justin Wilson took over in relief and tossed a shutout seventh.

Edwin Diaz struck out the side in the eighth.

New York had its first base runner in the opening frame. Michael Conforto knocked a ball through the shift into right center for a one-out base hit and advanced to second on a J.D. Davis ground out, but the right fielder was left stranded.
The club got another two on when Jeff McNeil and Andres Gimenez hit back-to-back two-out singles in the second. A wild pitch sent the pair to second and third, but Wilson Ramos grounded out to end the inning.

Davis knocked a two-out single in the third, and Dom Smith hit a ball through the shift into right to put runners on the corners. Robinson Cano drew a walk that loaded the bases and Pete Alonso flew one out to center to retire the side.

New York had nothing across in the fourth.

The club’s sole run of the evening was scored by Brandon Nimmo, who slugged the first pitch of the fifth inning out of right field to make it 2-1 Phils.

Cano knocked a leadoff single in the sixth and it looked like the team had a one-out rally going with the bases loaded on a McNeil single and Gimenez hit by a pitch, but Ramos grounded into a double-play that left the trio stranded with the tying run on first.

Mets got the leadoff man on again in the seventh on a Nimmo single and the eighth when Dominic Smith was hit by a pitch. With two outs, McNeil doubled for second and third with the tying run again at the plate. But New York again couldn’t capitalize, as Gimenez hit into a fielder’s choice and McNeil was tagged out at third on the play before Smith could reach home plate. Poor base-running cost a run, as there was no force at second for McNeil.

In the top of the ninth Conforto drew a one-out walk and Davis knocked a base hit over second to restore some faith. But Dom Smith was fanned with two on and two out, and the ball game came to a dismal finish. A recurring theme this season, the bats fell cold with runners in scoring position as the team left 12 runners on base- nine of them in the last four innings.

The Mets look to bounce back from the loss with their ace on the mound tomorrow evening in the second of the three-game series against the Phillies.

Jacob deGrom (4-1, 1.67 ERA) will get the start for New York. In his last outing against the Blue Jays, deGrom allowed just one run on three hits with two walks and nine strikeouts. Jake currently leads the National League in ERA (1.67), is second in K/9 (13.167) and third in WHIP (0.870) as he cements a strong case for his third straight Cy Young Award.

The Phillies’ starter is still to be determined. Girardi later stated that Zack Wheeler may start on Wednesday for Philadelphia.

First pitch at Citizens Bank will be at 7:05 PM on September 16th. The game will be televised by SNY and broadcast on WCBS 880-AM.