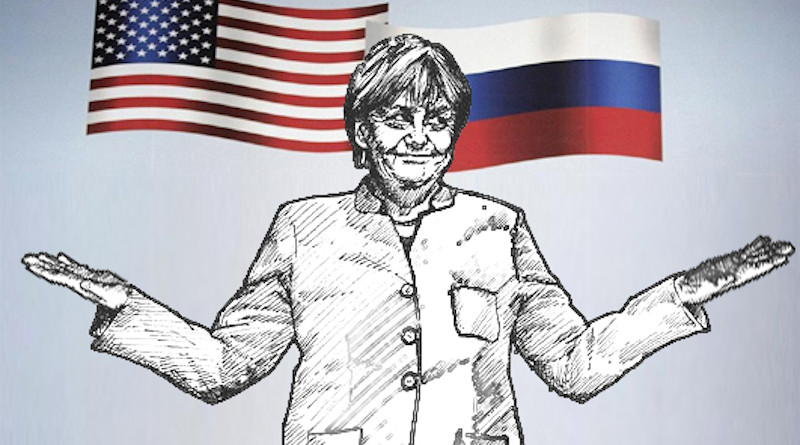 Beneath the scandalous stories of Alexei Navalny's poisoning in Siberia by Putin, a sinister plot is unfolding. The venue: Germany. Chancellor Angela Merkel seems at the root of it.

To find out what's really going on, I interviewed Swiss businessman Pascal Najadi. He's known for investigating high-level misconduct. Cases from Great Britain to Russia to Malaysia have been on his radar screen. Now he's seen a blip appear from Germany. He tells me it is about the Navalny case. Here's my interview.

Me: Tell me, why is Germany a new blip on your radar screen? The Navalny story is about a Russian being poisoned in Russia. Why is it even of great international concern? What is this plot that you uncovered?

Najadi: The exaggerated international concern is a separate matter. For now let's stick to the German situation.

Me: Okay, tell me about that.

Najadi: The reason Germany is involved is because Russia released the ailing Alexei Navalny for treatment at a German hospital. He was airlifted by a German medically equipped aircraft and admitted for care at the Charite hospital in Berlin.

Me: Why did the Russians send him to Germany? I've seen that he was being treated in a Russian hospital in the city of Omsk. Why Germany?

Najadi: News reports said it was at the request of Navalny's wife.

Me: Okay, I see. Now, how did Chancellor Merkel get involved and what is this "Project Schnauzer"?

Najadi: It is an apparent plot by Merkel that is intensifying the dangerous rift between the United States and Russia.

Me: How is she doing that?

Najadi: It started with statements she issued. In them she is standing alone against both German and Russian medical authorities.

Me: But those German and Russian doctors hadn't been agreeing between themselves about what happened to Navalny. I saw that the chief regional toxicologist in Russia stated that they had performed "major testing" in Russia. The results failed to find any trace of poison, according to that toxicologist. After testing in Germany, however, Charite hospital reported clinical signs of poisoning, but pointed out they had not identified a specific agent.

Najadi: That is correct. That is my understanding too.

Me: So how did Merkel's statements differ? Did she disagree with both the Berlin and Russian hospitals?

Najadi: She added something new. On September 2, Merkel told a news conference: "Alexei Navalny was the victim of an attack with a chemical nerve agent of the Novichok group." It is a chemical weapon developed by the Soviet Union.

Me: What was the reaction of the two hospitals, the German and the Russian?

Najadi: The Russian toxicologist you mentioned was quick to react. He said, "It's without any doubt not Novichok" BBC said he called the German diagnosis a "fantasy."

Me: What was Charite's reaction?

Najadi: Initially, there was none. But since I was expecting to do an article or interview on this, I wanted to know of their reaction. So I emailed them on September 2:

--There is a possible discrepancy in reports from within Germany.

--I see German government has identified Novichok as the agent that poisoned Navalny.

--Your statement today refers to a "proven" poisoning with no mention of Novichok.

--Your statement of August 28 reported that "the specific substance remains unknown."

--Can you clear up this discrepancy? Did you or did you not identify Novichok as the specific agent of poisoning?

I asked for a prompt reply.

Me: Did you get one?

Najadi: No, nothing at first. But I persisted and contacted the hospital by phone more than once. They were very pleasant with me and said a written response would be forthcoming.

Me: I presume you eventually got it. What did it say?

Najadi: On September 9 I did receive an email from the hospital's chief spokesperson, Manuela Zingl.

Me: And what did she say?

Me: What do you make of that?

Najadi: The last statement from Charite about the poisoning was that "the specific substance remains unknown." The hospital promises to inform the public "when there are new findings." Merkel put out the story that Novichok was found in a biological sample from Navalny. Charite's response is that the hospital does not "comment on assumptions and speculations." That seems to be an unmistakable characterization of Merkel's report. That was their final word. Charite says they do not want to comment further on this.

Me: So that's the essence of "Project Schnauzer?" That Merkel's comments were regarded as assumptions and speculations?

Me: I do. But it looks like Merkel is playing some sort of a political game.

Najadi: There is more to her political game than that.

Me: What for instance?

Najadi: The German-Russian gas pipeline project, almost completed, is involved. Former chancellor Gerhard Schroeder is its chairman. There's no secret that the Trump administration wants to scuttle it.

Najadi: It is because the US wants to continue selling its liquefied natural gas to Merkel at a high price. It is a very political matter.

Me: Are there other political issues?

Najadi: Sure. Merkel has provided biological specimens from Navalny to her EU allies in France and Sweden. But she has refused Russian requests for the same. Merkel says her allies confirm the German finding of Novichok, but denies Russia a similar opportunity.

Me: Do you know why?

Najadi: Yes, it is a result of Project Schnauzer. Germany has refused Russian requests for the Navalny specimens for examination. German news agency DPA reports, "The German government sees no reason to hand the evidence directly to Russia, deputy spokeswoman Martina Fietz told reporters. Meanwhile, Ms. Fietz goes on to say, 'We continue to appeal to the Russian side to deliver information.'" But Navalny, still in German custody, reportedly has himself rejected any cooperation with a Russian investigation.

Me: Doesn't that put Russia into a no-win position?

Najadi: Yes, of course it does. That is central to Merkel's spiking US-Russia tensions. Even stranger is Germany's providing samples to the Organization for the Prohibition of Chemical Weapons (OPCW).

Me: What's so strange about that? Isn't Russia a member of OPCW?

Me: Interesting. We're nearing the end of this interview. Is there anything you want to add?

Najadi: Yes. Let's go back to your early question, "Why is it even of great international concern?" Perhaps by now it is obvious. But let me spell it out. Why would the poisoning of a Russian on Russian soil stir multiple countries to threaten Russia with severe sanctions and cancellation of an almost complete German-Russian pipeline? For comparison I ask the question, why was the tragic death of George Floyd not reacted to internationally in a similar way? There was a man apparently killed by an American police official. Individuals protested his death in many foreign countries. In the United States there was mass rioting and looting in response. There was a breakdown in social order. More people were killed. Property damage was extensive. But no nations challenged the US to take control of its country by threatening sanctions or canceling business deals. No, the Navalny matter was treated very differently. It was a great international concern because it was made to be one. That is the impact of Project Schnauzer. That is all I have to say now.

Me: Thank you for your insights and perspective.

How to change the default email app on your iPad, so all your email goes through your app of choice

Loved one's gifts should be freely given