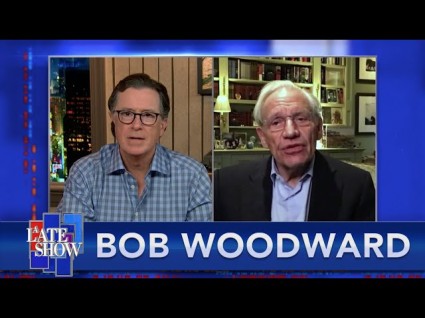 ‘Last Cigarette’ or ‘Final Meal’ would have put me over the moon, but alas, that’s for another day.

Anyway, it is an extraordinary phone call.

Essentially Lord Damp Nut tries to convince Woodward that the economy is roaring back and therefore the Trump-Virus doesn’t matter:

Trump finally asked: “So you think the virus totally supersedes the economy?”
“Oh sure. But they’re related, as you know,” Woodward responded.
“A little bit, yeah,” Trump replied.
“Oh, a little bit?” Woodward asked.
“I mean, more than a little bit. But the economy is doing — look, we’re close to a new stock market record,” Trump said.

He still doesn’t get it.

In another part of the conversation, Woodward told Trump there are parts of the book the President won’t like. “It’s a tough book,” he said, adding that it’s “close to the bone.”
“You know the market’s coming back very strong, you do know that,” Trump responded to Woodward.
“Yes, of course,” Woodward said.
“Did you cover that in the book?” Trump asked.

Look, there’s only one conclusion you can draw: Prznint Stupid only sees two things that matter in this world: 1) Himself and B) money. That’s it. There is nothing more in his world view.

MPs will get to have a say on coronavirus laws