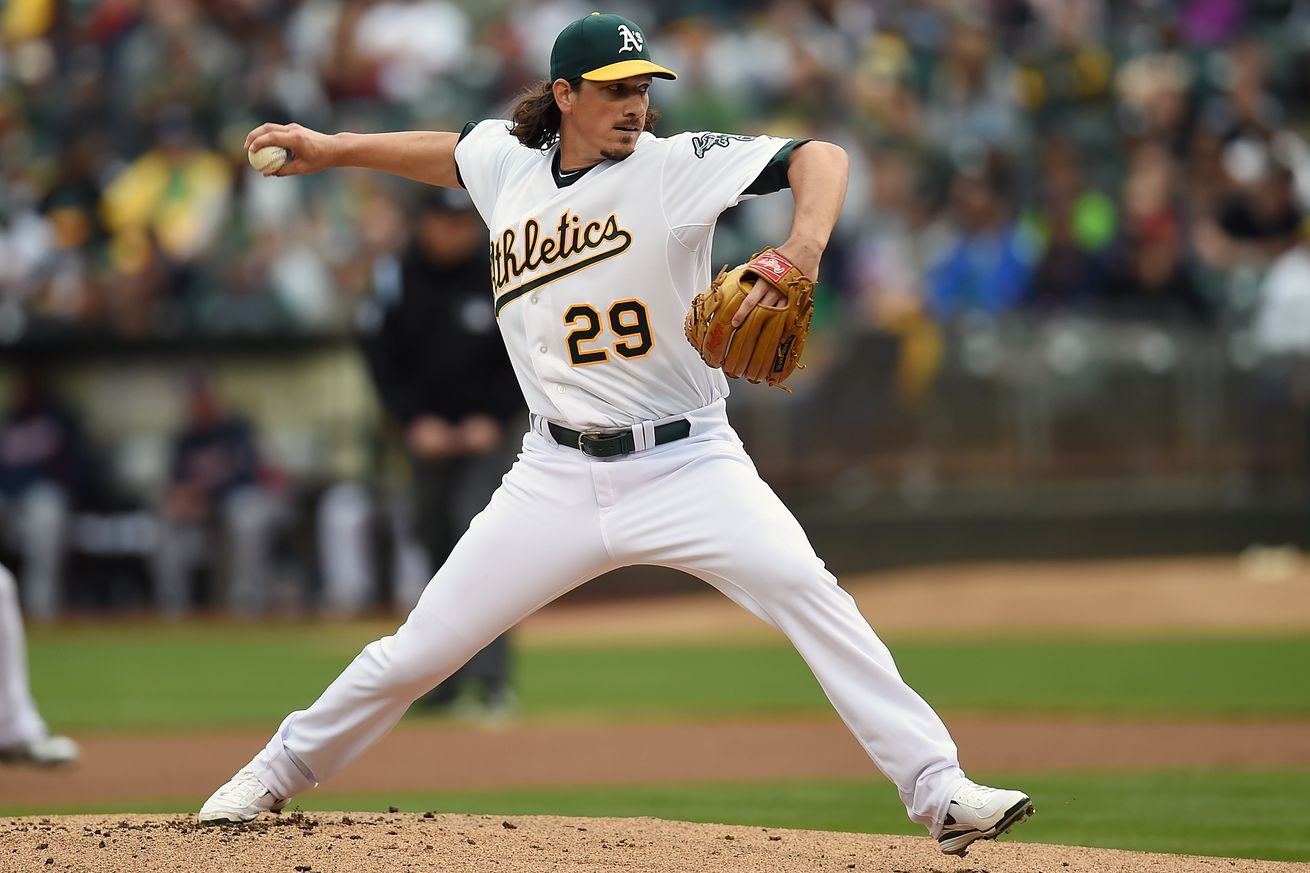 This year’s Trade Retrospective ends the same way it started, with Jeff Samardzija getting traded.

For the fifth straight offseason, BtBS is looking back on some of the biggest trades from years past. Check out all the entries here.

Not even five months after acquiring him at the 2014 trade deadline, the Athletics decided to trade Jeff Samardzija to the White Sox, the team he grew up rooting for, in exchange for Marcus Semien, Josh Phegley, Chris Bassitt, and Rangel Ravelo. In addition to sending the Shark back to Chicago, the A’s also included Michael Ynoa in the trade.

In this trade retrospective series, trades will be evaluated based on what was known at the time. That is the only fair, logical way to evaluate trades and strip luck out of the equation: process over results. Having said that, we will still take a look at how the trade worked out for both parties.

As I discussed in Samardzija’s trade to Oakland, the A’s suffered an epic collapse after acquiring him, and then got eliminated by the Royals in a Wild Card game for the ages. Samardzija performed well for the A’s and overall for the season, but he was headed into a contract year. The notoriously cheap A’s likely did not want to pay him nearly $10 million in arbitration, either.

Remember, the A’s had traded Josh Donaldson just a couple of weeks prior to this trade. Billy Beane’s MO was a preference to trade high value players for prospects instead of keeping them to be competitive. To be fair, this was a result of owner John J. Fisher’s perpetual narrative that he can’t afford to spend, even though he is worth $2.4 billion and the game keeps bringing in record revenue (this year excluded, obviously).

(I am aware that citing owner net worth has its flaws, but you can’t deny the lack of logic behind billionaires crying poor. Regardless, they’re free to open their books anytime they’d like.)

Once the A’s parted with Donaldson, trading away Samardzija made perfect sense. Keeping in mind that scouts did not expect Semien to be more than a utility guy at the time, this was a fair return for one season of Samardzija. You would’ve like to have seen a higher impact prospect included, but Semien and three other prospects was just fine.

One could argue that Phegley was the best player acquired by the A’s. He was a catcher who could at worst be a back-up, but potentially could start. Bassitt was an end of the rotation guy. Ravelo was a bit of a throw-in as a first base-only prospect who needed to develop more power. Ynoa, the prospect that the White Sox received, was looking like a prospect bust that the A’s had given up on.

As for the White Sox, it’s tough to see their thinking here. They had come off a 73-win 2014 campaign that was 12 games behind third place Cleveland. That offseason they also acquired David Robertson, Adam LaRoche, Zach Duke, and Melky Cabrera. It’s great to see a team trying to win, but they were a long way off from being competitive, especially in the AL Central. I’ve always had a good impression of GM Rick Hahn, which only increased when he did a Saberseminar Q&A one time, so I wonder if ownership had forced him to go all in for 2015.

Neither team really should’ve executed this trade, despite the fact that each side got more or less fair value. The A’s should’ve kept Samardzija as well as Donaldson and see what they could do a year after winning 88 games. The White Sox should’ve accepted where they were in their competitive cycle, save the $9.8 million they had to pay Samardzija, and hung on to their prospects.

Samardzija was pretty disappointing in his one and only season with the White Sox. He was barely better than replacement level, despite throwing 214 inning. The problem was his 5.13 RA9 and his failure to strike out even 18 percent of the batters he faced. Thankfully, it didn’t hurt him much in free agency. He went on to sign a five-year, $90 million deal with the Giants.

It’s mostly gone quite well, too. Samardzija had a terrible 2018 due to injury, but he was quite effective in the the other three years, where he averaged a 4.15 RA9 and accumulated 8.4 WAR. He’ll be a free agent after this season. It’ll be curious to see what will happen with him if chooses to continue playing. He’ll be entering his age-36 season next year, and who knows how teams will factor in 2020 performance. Teams can count on him to pitch a lot of innings, but that is not as valued as it used to be. Besides his age, his declining strikeout rates are a problem.

As you are probably quite aware, Semien had an epic breakout season last year, deservedly finishing third in the AL MVP voting, and one could’ve made an argument that he should’ve done even better than that. He hit .285/.369/.522, and his .373 wOBA beat his previous career best of .315 by almost 60 points. The biggest change in Semien appeared the year before, when he became an excellent defensive shortstop after years of looking like a fringey one at best. Say what you will about Ron Washington as a manager, but the guy can really coach. He is the one who has been credited for Semien’s dramatic defensive turnaround.

Semien had a a 4.7 WAR season in 2018, and then had a whopping 8.9 WAR season last year. Unfortunately for A’s fans, he will be a free agent after this season, so it’s hard to see him being in an A’s uniform in 2021. Fisher likes to cry poor when revenue is high, so you can imagine what he’ll be like this upcoming offseason.

Before White Sox fans cry too hard over missing out on Semien, I need to emphasize a point I frequently make: it’s tough to assume that a player would’ve developed the same way in a different organization. This is especially true with a player like Semien who clearly benefited from some excellent coaching. Still, he wasn’t bad before 2018, so he might’ve gotten traded anyway from a rebuilding Sox team. I’d say that they could pick him up in free agency this upcoming winter, but they might be all set at the keystone with Tim Anderson and the upcoming Nick Madrigal.

There’s not too much to say about Phegley, other than he has had the career that prospect analysts expected to him to have. He has been a serviceable back-up catcher who stayed in Oakland, and his time there was highlighted by catching Mike Fiers’ second career no-hitter last May. The A’s non-tendered him at the end of the season, leading him to sign a minor league deal with the Cubs.

Bassitt is still with the A’s, though he didn’t see much major league action before last season. A major reason for that was his missing the entire 2017 season and almost the entire 2016 season due to Tommy John surgery. He did have a solid year in 2019, with a 4.13 RA9 and decent peripherals.

Ravelo didn’t debut until last year, and even then it was just a short stint with the Cardinals where he hit only .205/.256/.410, albeit in 43 PA. He did perform well in Triple A last year, so I wouldn’t give up on him just yet. The problem is how much playing time he is going to see on a Cardinals team that has Paul Goldschmidt.

Ynoa didn’t debut for the White Sox until 2016, and he hasn’t appeared in the majors since 2017. During those two seasons he appeared as a reliever in 45 games and had a 5.03 RA9. His peripherals were not much better, as he was walking everyone while striking out fewer than 20 percent of the batters he faced. The Sox released him before the 2018 season, and he wound up not playing professionally at all that year. He played briefly with the Royals’ Triple A team last year. Now he is back with the A’s on a minor league deal.

Yeah, you don’t need me to tell you that’s awesome. Don’t sell Phegley or Bassitt, short either. A nice back-up catcher is nothing to sneeze at, nor is rotation depth.

The process nor the results were in the White Sox’s favor in this trade. Perhaps had Samardzija been better, they could’ve flipped him at the 2015 trade deadline, but he had a down year. This was just a really peculiar trade for the White Sox. Thankfully this team should be competitive again very soon, maybe even this year!

This concludes four seasons worth of Trade Retrospectives done by me. They were initially started by Spencer Bingol, who retired form the site and went on to join the Red Sox analytics department. Spencer got to be part of the 2018 parade.

I had only been with BtBS less than six months when I was approached by my then-managing editors, Ryan Romano and Henry Druschel, about taking over the series. As someone who loves, loves trades, I couldn’t agree fast enough. Also, a bevy of free ideas during the offseason are gold. I was especially lucky that there were so many interesting trades for this season’s entry. I’ve loved writing these articles, even though they tend to be more work than regular ones.

I say all this because this might very well be my final Trade Retrospective article. I hope you’ve enjoyed reading them as much as I’ve enjoyed writing them.

Luis Torres is a Featured Writer at Beyond the Box Score. He is a medicinal chemist by day, baseball analyst by night. You can follow him on Twitter at @Chemtorres21.