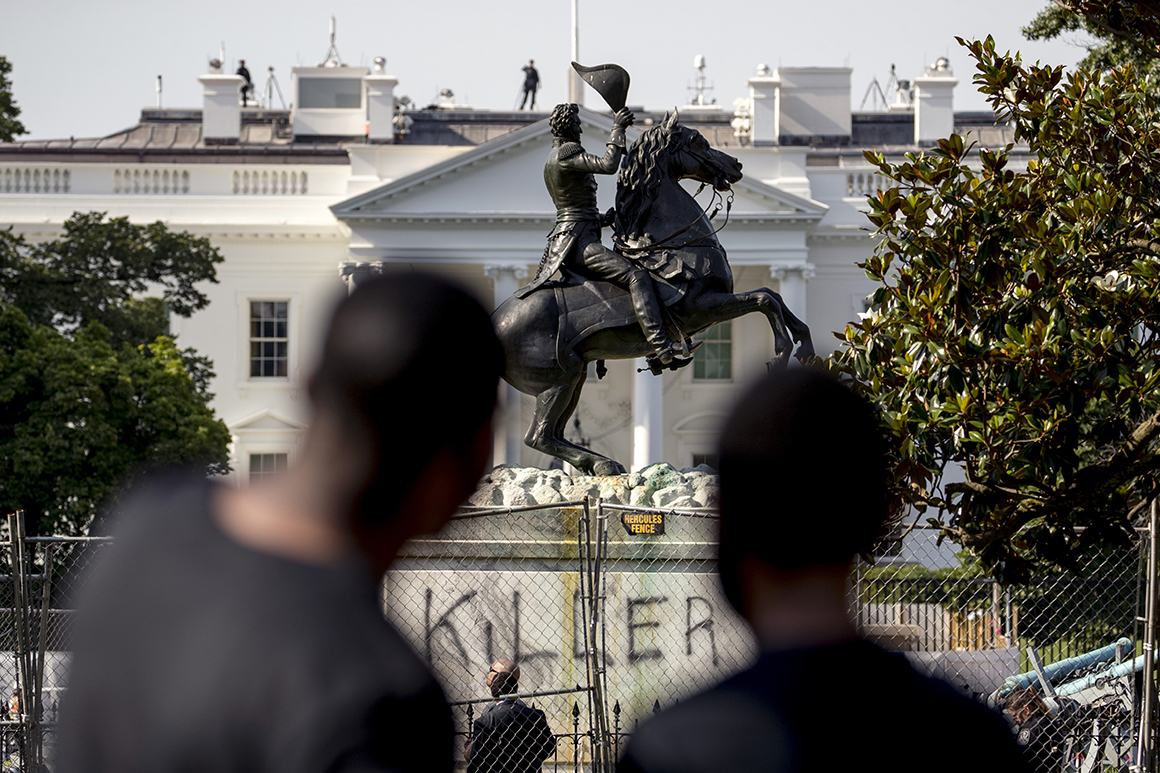 A District of Columbia National Guard officer claimed law enforcement used excessive force on peaceful protesters in Lafayette Square last month, directly disputing the White House’s account of events that led to a photo-op during the height of demonstrations against racial injustice.

Adam DeMarco, a major in the D.C. National Guard and Iraq War veteran, will testify on Tuesday in front of the House Natural Resources Committee that he observed a brutal law enforcement reaction against protesters exercising their First Amendment rights. A copy of his prepared testimony was released Monday.

“Members of the Committee, the events I witnessed at Lafayette Square on the evening of June 1 were deeply disturbing to me, and to fellow National Guardsmen,” DeMarco's written testimony said. “Having served in a combat zone, and understanding how to assess threat environments, at no time did I feel threatened by the protestors or assess them to be violent.”

DeMarco was among the D.C. National Guardsmen stationed at Lafayette Square on June 1 when federal authorities used tear gas and flash-bang grenades to clear peaceful demonstrators gathered to protest racial injustice and the killing of Black people by law enforcement. Once the square had been cleared, President Donald Trump walked across it from the White House for a photo-op with a Bible outside St. John's Episcopal Church, where rioters had set a small fire the night before.

The fallout from the photo-op was swift. Politicians condemned the tear-gassing of protesters and top military officials who accompanied Trump apologized for their role in the incident. U.S. Park Police officials, whose jurisdiction includes Lafayette Square, initially claimed their officers did not use tear gas to clear the square but later conceded that chemical irritants had been deployed.

“From my observation, those demonstrators — our fellow American citizens — were engaged in the peaceful expression of their First Amendment rights,” DeMarco wrote. “Yet they were subjected to an unprovoked escalation and excessive use of force.”

The White House has defended the decision to clear the square and compared Trump's walk across it to former British Prime Minister Winston Churchill's surveying of war damage in London during World War II and former President George W. Bush's ceremonial first pitch in Yankee Stadium during the World Series after the terrorist attacks of Sept. 11, 2001.

According to DeMarco’s account, Park Police said they would be clearing demonstrators out of Lafayette Square, along with Secret Service, in order to construct a perimeter fence around the White House. But the materials necessary to build the security barrier did not arrive until 9 p.m. and the barrier was not completed until later that night, DeMarco wrote.

DeMarco, whose testimony details his June 1 assignment as a "liaison between the DC National Guard’s 'Task Force Civil Disturbance' and the Park Police at Lafayette Square," said warnings from U.S. Park Police to protesters to disperse from the square were inaudible. He also said he was given assurances by a Park Police liaison that tear gas would not be used.

“But I could feel irritation in my eyes and nose, and based on my previous exposure to tear gas in my training at West Point and later in my Army training, I recognized that irritation as effects consistent with CS or ‘tear gas,’” DeMarco wrote. “And later that evening, I found spent tear gas cannisters on the street nearby.”

On July 24, the inspectors general for the Department of Justice and Department of the Interior launched a probe into law enforcement actions taken at Lafayette Square on June 1.

DeMarco concluded his statement by quoting Rep. John Lewis (D-Ga.), the late civil rights icon who was laid in state at the U.S. Capitol on Monday.

“‘When you see something that is not right, not just, not fair, you have a moral obligation to say something, to do something.’”