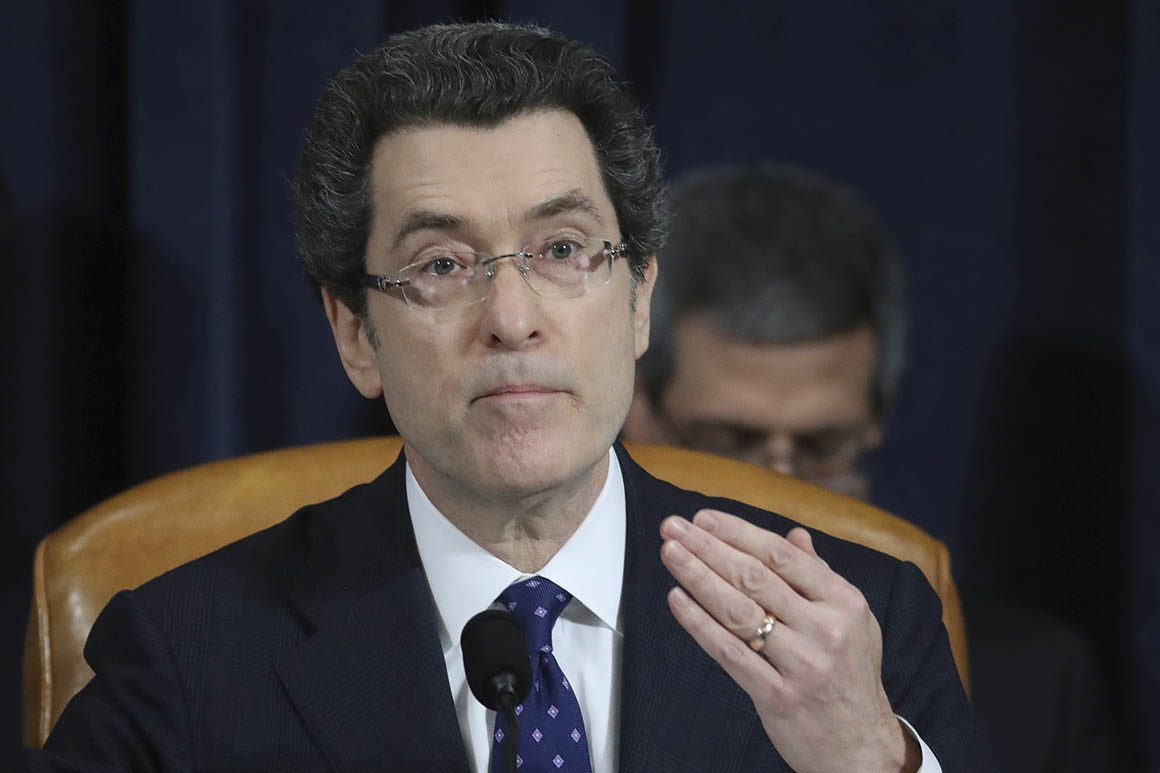 The renewed national debate over the purity of America's founders has highlighted an unmistakable truism: The people who have led this country — throughout its glorious and troubled history — are flawed, full of contradictions and far too easily lionized, their sins airbrushed for polite company.

So the arrival of a rapid-fire history of the House’s impeachment of Donald Trump, set to hit shelves Tuesday, provides some notable candor about the figures who led the nation into and through the third-ever Senate trial of a U.S. president.

“A Case for the American People,” by Norm Eisen — an architect of the House Democrats’ impeachment strategy —isn’t shy about its conclusions: Eisen believes in his bones that Trump is a recidivist criminal who must be ousted to save the republic. He also believes the Democrats who engineered Trump’s impeachment are heroes on par with the founders. The book is, at bottom, an effort to convey those conclusions — and Eisen's centrality to the impeachment effort — to the wider world.

But Eisen’s 280-page chronicle of the impeachment era, replete with his inside-the-room knowledge of how the process unfolded, juxtaposes lawmakers’ lofty pronouncements about protecting democracy with the often provincial tensions and messy House politics that drove decisions of national significance.

Eisen, who signed up as a House Judiciary Committee attorney in early 2019 with an eye toward impeachment, also describes the hail of early “f--- you’s” he delivered to House Intelligence Committee aide Daniel Goldman, who he said had accused him of treading on the panel's turf. (They would later get past the initial tension, Eisen says). He describes how internal Democratic politics led him to shave a planned 10 articles of impeachment — encompassing a sweeping range of allegations such as “collusion” and “hush money payments” down to three, and then two, after vulnerable Democrats rejected charging Trump with obstruction of justice.

Eisen reveals the sometimes painful conflicts between House Judiciary Chair Jerry Nadler (D-N.Y.) — in Eisen’s eyes, the unsung hero of impeachment — and House Intelligence Chair Adam Schiff (D-Calif.) and Speaker Nancy Pelosi, who often resisted Nadler’s lead-foot on the impeachment accelerator. Nadler drew Pelosi’s ire throughout the process by leaning into calls for impeachment faster than the rest of the House was ready for, and Eisen said Nadler had accepted that it would take time to restore his “former level personal warmth” with the speaker.

Eisen is the unlikely narrator for a book about a gloomy period in American history. The preternaturally affable former ambassador often seemed out of place in the take-yourself-too-seriously backrooms of the U.S. Capitol. Eisen can often be found in the backdrop of iconic images of the impeachment hearings and trial, sporting a sly perma-grin beneath a head of tight curls.

He describes his own mischief, at times, noting that when rumors emerged that Pelosi was considering a select committee to wrest the impeachment process away from Nadler, he worked with fellow Nadler staffers to crush the idea.

“We immediately started talking to everybody, from the antiTrump neocon right to the progressive left, to try to put the kibosh on the select committee idea,” Eisen writes. [Nadler chief of staff Amy Rutkin] and I furiously worked our Rolodexes, as did the entire staff.”

Among their successes? Eisen writes that he persuaded anti-Trump conservative Bill Kristol to rescind support for a select committee and that Rutkin persuaded progressive Rep. Alexandria Ocasio-Cortez (D-N.Y.) to retweet Kristol’s reversal, adding her own note of urgency to leave the process with the Judiciary Committee.

In short, Eisen’s book is “This Town” for the impeachment era, an X-ray vision view of Washington’s seamy interconnectedness, transplanted to the most consequential stage of all: the floor of the U.S. Senate during a doomed attempt to remove Trump from office.

Eisen — a former ambassador to the Czech Republic and Obama White House’s ethics czar — regales readers with his decades-old entanglements with many of the figures involved in Trump’s trial, from Trump's trial lawyers to even the State Department's impeachment witnesses, like former Ambassador Marie Yovanovitch, whom he describes as "my friend and former colleague."

“Judge Ken Starr, the Clinton independent counsel, and Professor Alan Dershowitz. I had worked for Dersh in law school—my first legal job,” Eisen writes. “Starr had also been kind to me when I was a young lawyer and gofer on the Clinton impeachment. Both had visited me in Prague.”

Eisen also self-deprecatingly recounts, during a spate of clandestine pre-impeachment negotiating sessions with White House lawyers, he had an inadvertent run-in with Trump adviser Kellyanne Conway.

“‘Norm Eisen, what are you doing here?’” Eisen recalls Conway asking. “I evaded her question, genuinely concerned she would put the kibosh on the negotiations. After some not-so-gentle teasing back and forth about which of us was more corrupt, she said she was on her way to see the president. “‘I’ll tell him I saw you!’” she said, per Eisen’s telling.

Perhaps most consequentially, Eisen describes an old friendship with Robert Trout, who became longtime Trump aide Hope Hicks' lawyer during the House's quest to investigate Trump. Trout, Eisen said, was "an old friend and mentor" and personally disagreed with the White House's claim that Trump's aides were "absolutely immune" from testifying to Congress, a legal theory that courts have largely rejected too. So Trout became the first lawyer to negotiate in-person testimony for a high-level Trump aide — in exchange for a promise to do it behind closed doors.

I spoke with Eisen, who I observed from afar throughout the impeachment process, about dichotomies on display in his book, which I said playfully could also be dubbed “The Gospel of Jerry.” (Someone on Schiff’s team would have to write “The Gospel of Adam” to capture the Intelligence Committee’s side of the story, large swaths of which are omitted here.)

In the interview, Eisen acknowledged telling a Nadler-centric version of events, in part because of his vantage point from the dais of the Judiciary Committee. But it’s also because he describes Nadler as “the least well known and in some ways the most complicated” member of what he calls the impeachment’s “Great Triumvirate,” along with Pelosi and Schiff.

The complexity, he said, stems from Nadler’s long history with Trump. The two battled during Nadler’s days as a local New York politico — when Trump was a celebrity developer — and understand each other better than most. It’s why, Eisen posits, Trump called from Air Force One to check in on Nadler in May 2019 after the would-be impeachment manager briefly fainted from dehydration at a public event.

“Shortly after the call, I asked Jerry if he thought Trump was doing it to rub it in or to lord it over him after he felt ill,” Eisen writes. “‘Absolutely not,’ he said without hesitation. Jerry said Trump sounded lonely and that it was an opportunity for him to make a connection — yes, with an adversary, but nonetheless one who had known him the longest of all of his current primary antagonists.”

Eisen said Trump’s long history with Nadler is another example of the complexities beneath the surface of the impeachment process — everyone knew everyone, sometimes for decades.

“There's a story like that for literally anyone who was involved in this impeachment,” Eisen said in the interview. “This is a small town, it is an industry town. Government is the company store that we all live off of.”

The book is also the story of typically anonymous staffers — some who prefer to remain that way — into the storylines that they help drive and shape for their more powerful bosses. Judiciary Committee fixtures like Perry Apelbaum, Aaron Hiller and Arya Hariharan play featured roles in crafting and pushing the House's impeachment strategy, alongside Eisen and co-counsel Barry Berke.

Eisen recalls Pelosi becoming frustrated during one closed-door meeting — details of which leaked out at the time — because of the efforts Judiciary Committee staff (Eisen included) to drive the House toward impeachment before she and the caucus were ready.

“They may think they run the place, but they do not,'" Pelosi told colleagues, in Eisen's telling. "That’s a caucus decision, not theirs. And you can tell them that."

Eisen writes that the speaker's go-slow approach became a challenge of sorts: to convince her that the case against Trump was so overwhelming that she should reverse. That led to repeated friction with the speaker, whom Eisen described as justified in her approach.

"Pelosi was rightly concerned about the whole caucus, including the forty or so front-liners and new members who represented districts that Trump had won and who had given her the majority," he writes. "She had been annoyed with our pushing, which Jerry accepted. We had a job to do, and she had a job to do."

Another undercurrent throughout Eisen’s book is disappointment. He’s consistently let down by figures he viewed as principled who, by the end of the impeachment trial, he came to see as corrupted by the influence of Trump — he names William Barr and Rod Rosenstein, who (surprise!) Eisen has known since 1993 when he says they vied for the same Justice Department job. But he saves his most unsparing criticism for special counsel Robert Mueller, a figure he said he once revered but who he said let the country down in the aftermath of his investigation of the Trump campaign’s 2016 contacts with Russia.

Eisen, as a Judiciary Committee lawyer, helped lead the drive to bring Mueller to Capitol Hill, but was among those who was underwhelmed by Mueller’s testimony and felt he "abdicated" during the probe by failing to meet the urgency of the allegations against the president.

That frustration carried over, Eisen said, to efforts to secure Mueller’s testimony on July 24, 2019.

“Mueller’s colleagues seemed more concerned about protecting Mueller from questioning than about protecting our democracy,” Eisen writes. “What difference does a pristine reputation make when Rome is burning around you?”

I asked Eisen about renewed efforts by Senate Democrats and Republicans to bring Mueller back to Capitol Hill before the election, and he was quick to reject the view that it could be a do-over of sorts. "He did not finish the job. He did not go to the limits of his prosecutorial authority," Eisen said. "When you're facing down a criminal of the president's nature, that is unforgivable."

The book is at its best when it’s providing a front-row view to the closed-door investigations of the Judiciary Committee or the Senate impeachment trial. Eisen describes a conversation on the floor with Starr and Mitt Romney, who would later become the only GOP senator to back Trump’s removal from office.

“Romney told Starr how much he appreciated his presentation, but proceeded to ask him a series of penetrating questions that spoke to a mind that had not been made up,” Eisen writes.

It was his earliest clue, he says, that Romney’s vote was up for grabs, and it helped the House’s impeachment managers tailor their arguments to at least capture his vote, even if the trial itself was lost.

Toronto Temperature: The Raptors are winners in the Bubble

Who Is Xander Schauffele’s Coach?