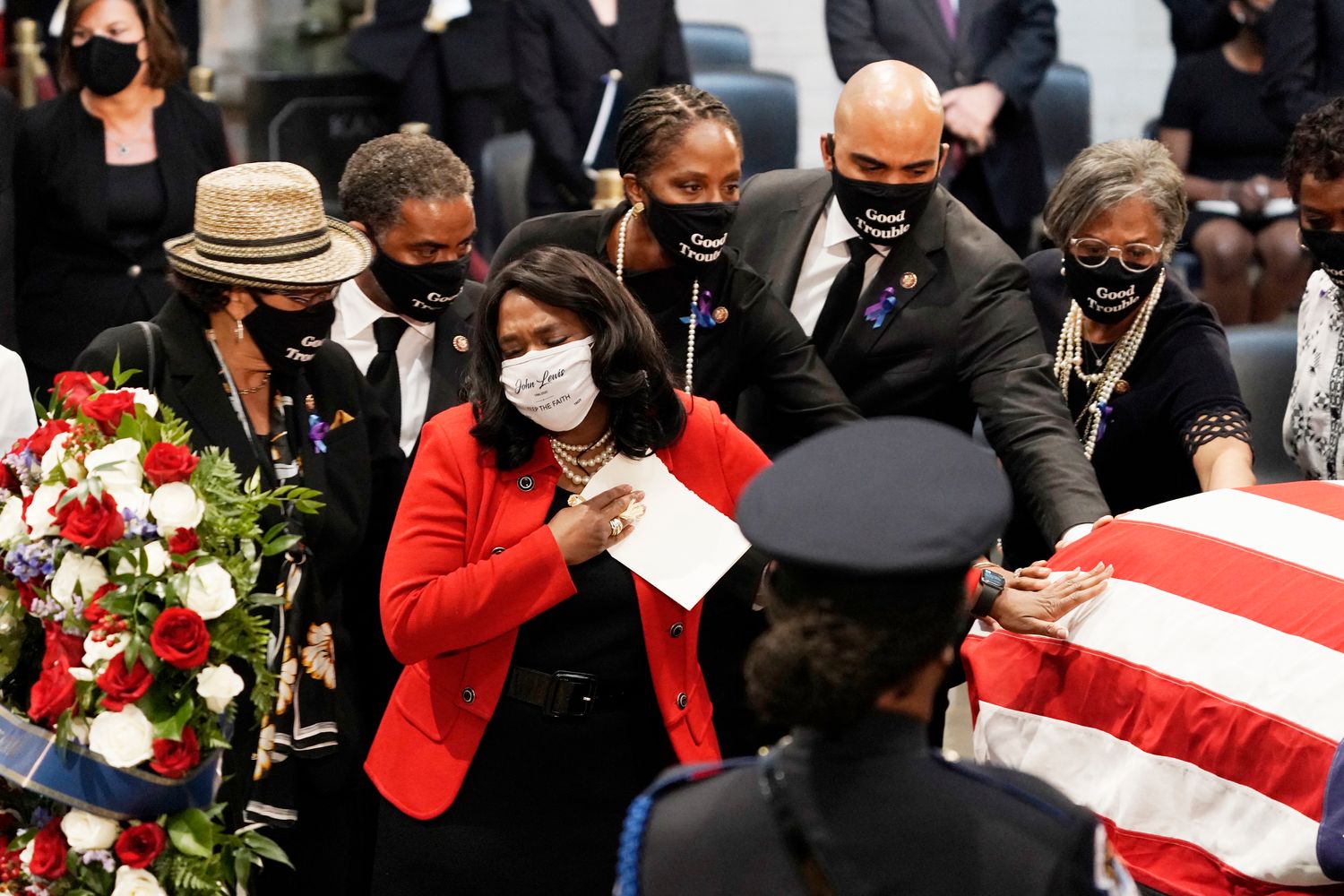 Capitol Hill said goodbye to the Conscience of the Congress on Monday.

Rep. John Lewis arrived at the Capitol a final time Monday afternoon, where he will lie in state for two days, one of the last stops for the civil rights icon who long ago transcended politics to become an American hero. Lewis, who died July 17 at age 80 after being diagnosed with cancer, will lie in state in the Georgia Capitol on Wednesday before being buried in a private funeral in Atlanta Thursday.

Lewis, the son of tenant farmers from rural Alabama who was nearly beaten to death by state troopers while marching for voting rights across the Edmund Pettus Bridge in 1965, went on to serve more than three decades in Congress and never tired of engaging in the “good trouble” he so often urged Americans to find. Lewis is only the second Black lawmaker to lie in state at the Capitol, following the late Rep. Elijah Cummings of Maryland, who was honored in Statuary Hall last year.

Speaker Nancy Pelosi, Senate Majority Leader Mitch McConnell and other senior lawmakers participated in an invitation-only ceremony in the Capitol Rotunda to remember Lewis for his leadership in the civil rights movement and 33-year career in Congress.

“Under the dome of the U.S. Capitol we have bid farewell to some of the greatest Americans in our history. It is fitting that John Lewis joins this pantheon of patriots,” Pelosi said during the ceremony.

After Pelosi spoke, Lewis’ own voice came booming across the rotunda as excerpts from his 2014 commencement speech at Emory University played, followed by a standing ovation from attendees.

The roughly 100 members and other invited guests, including D.C. Mayor Muriel Bowser and biographer Jon Meacham, were arranged in seats around the Capitol Rotunda, spaced several feet apart, with Lewis’ flag-draped casket in the middle. Around them, heavy black drapes covered all four of the entrances to the cavernous room.

The bipartisan group of more than 100 members had spent time mingling with each other, regardless of party, as Lewis' casket made its way to the Capitol — celebrating his life with selfies and stories. Several lawmakers donned black masks with Lewis’ signature “Good Trouble” phrase emblazoned across them.

Lawmakers sitting in the rotunda, particularly members of the Congressional Black Caucus, grew emotional during the tributes to Lewis. At one point, during a powerful rendition of "Amazing Grace" by vocalist Wintley Phipps, several members were openly crying and staff passed around a box of tissues.

House Majority Leader Steny Hoyer (D-Md.), a close friend of Lewis, and Minority Leader Kevin McCarthy (R-Calif.) then placed a wreath of red and white flowers on each side of Lewis’ casket.

The Senate offered its own, presented by Senate Minority Leader Chuck Schumer (D-N.Y.) and Sen. Tim Scott (R-S.C.), the only Black Republican in that chamber.

The roughly hourlong ceremony had few speeches, and instead focused on prayer, song and reflection — a tribute to a deeply spiritual man.

After the ceremony, hundreds of other lawmakers who were unable to attend the private ceremony lined up to pay their respects, from tea party Republicans like Rep. Louie Gohmert (R-Texas) to progressive firebrand Rep. Alexandria Ocasio-Cortez (D-N.Y.).

Several Capitol staff, too, were invited to take part, including aides who manage the House floor and the House chaplain, who donned a face mask and shield.

Afterward, Vice President Joe Biden, along with his wife, Jill Biden, made a rare Capitol visit to bid farewell to his former colleague. They lingered at the casket chatting for several minutes before Biden leaned over and placed his hand on the flag. Supreme Court Justice Sonia Sotomayor also briefly visited the rotunda to pay respects.

Vice President Mike Pence is also expected to attend the public viewing later in the evening.

Following the last of the visitors, Lewis’ casket will be transferred outside to the Capitol steps for an outdoor public viewing through Tuesday evening — the first such ceremony of its kind, meant to accommodate coronavirus-related restrictions.

President Donald Trump, whom Lewis frequently criticized for his divisive politics, told reporters Monday he would not be visiting the Capitol to pay his respects. 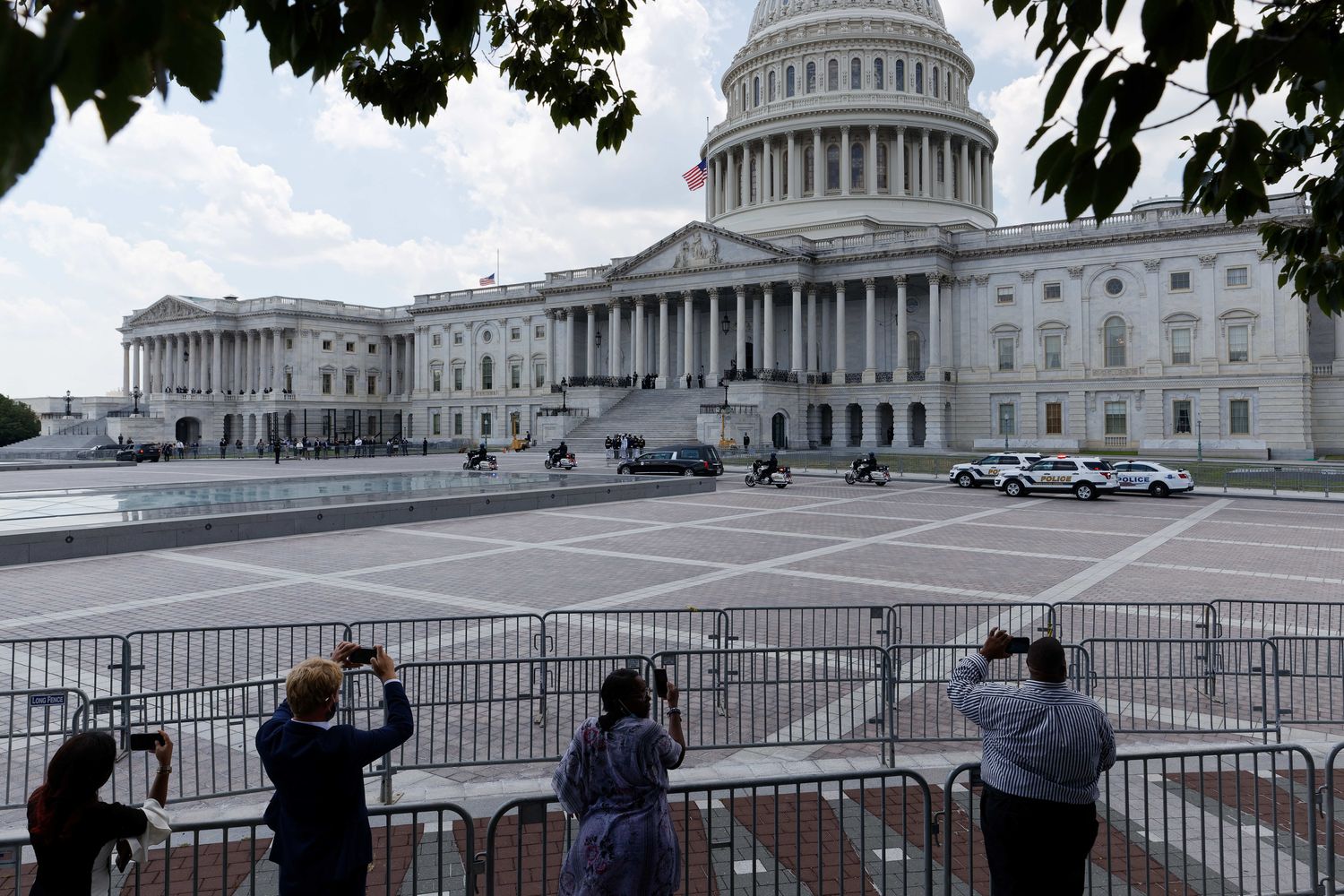 The mood of the Capitol building — where a flag has flown half-mast since Lewis' death earlier this month — was somber, with silence filling the halls instead of the usual chatter around the chamber. Pelosi had postponed votes for the members to mourn the loss of one of their own.

The public memorial will look dramatically different from the ceremonies of other noted Americans because of the ongoing pandemic. Hundreds of people are still expected to line up to pay their final respects just beyond the Capitol, but they will need to stand entirely outside, spaced several feet apart with masks required at all times, on a day when D.C. has a heat advisory in effect with temperatures set to exceed 100 degrees.

In a sign of the heat impact, a sailor in the honor guard tasked with carrying Lewis’ casket into the Capitol briefly collapsed while waiting for the ceremony to begin outside.

The Capitol viewing was just one of several stops over recent days to honor Lewis’ storied life and indelible place in U.S. history. A horse-drawn carriage carried Lewis’ casket across the bridge in Selma on Sunday, where he was saluted by state troopers at the end, more than 55 years after members of that same police force nearly cost him his life.

A motorcade carrying Lewis’ casket made several stops in Washington on Monday before ending at the Capitol, including the Martin Luther King Jr. Memorial; the Lincoln Memorial, where Lewis was the youngest speaker during the March on Washington in 1963; the National Museum of African American History, that Lewis fought for years to build; and Black Lives Matter plaza near the White House, where Lewis’ made his last public appearance in June.

Lewis’ death comes at a watershed moment for the nation, as protesters continue to fill the streets in several major cities demanding immediate action to address decades of police brutality and systemic racism.

One of Lewis’ last public messages was to the Black Lives Matter protesters, who started the nationwide reckoning over racial justice after the death of George Floyd, a Black man, by Minneapolis police in May.

“To see all of the young people — Black, white, Latino, Asian American, Native American — standing up, speaking up, being prepared to march, they’re going to help redeem the soul of America,” Lewis said during a virtual town hall with activists and former President Barack Obama earlier this summer.

“We need to tell people, tell each other, to be hopeful, to be optimistic, and to never, ever give up,” Lewis added.