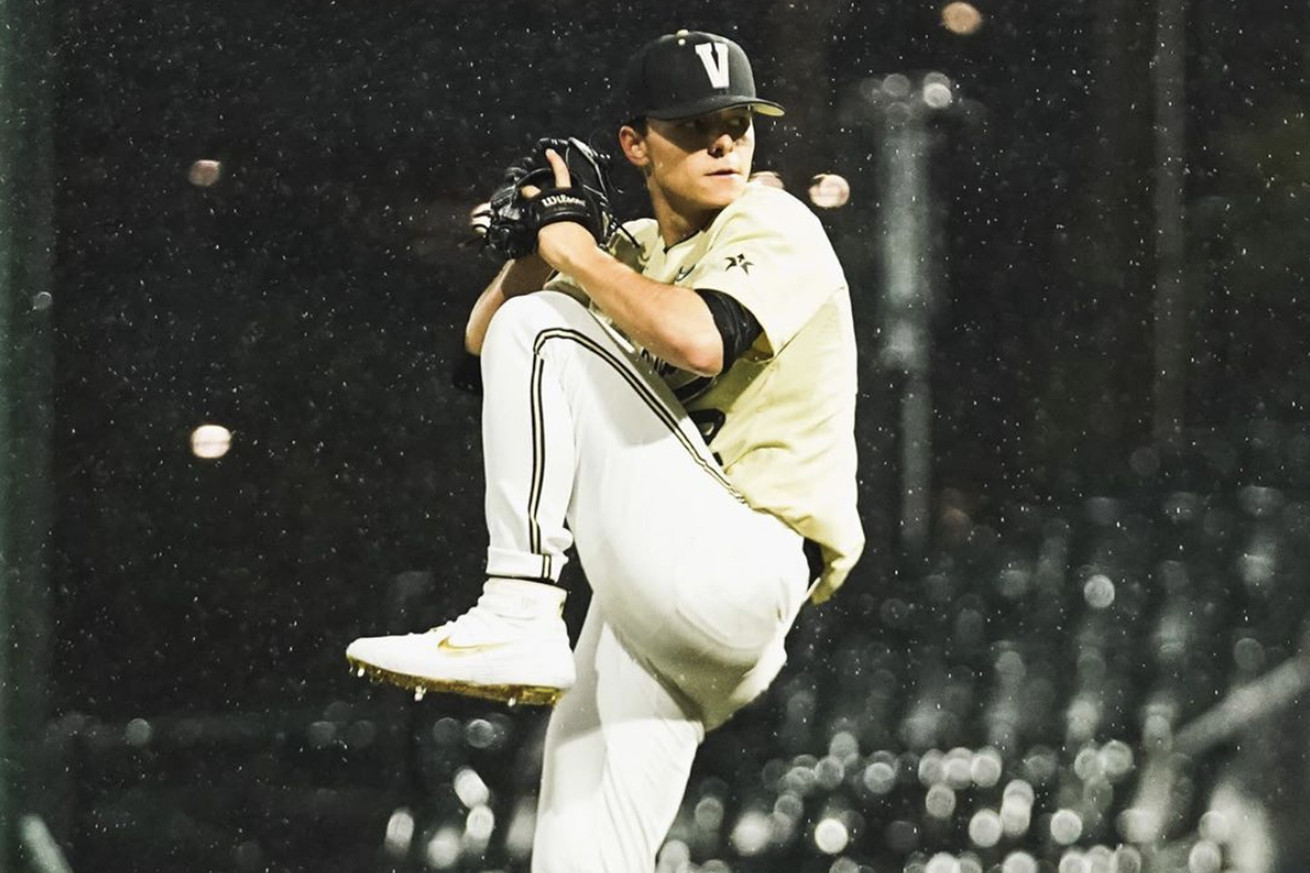 Separate the sorrow and collect up all the cream, the Vandy Man can

On this week’s episode of who will the Mariners draft out of Vanderbilt, we feature: RHP Jack Leiter.

Leiter, like fellow Commodore Kumar Rocker, is comfortably projected to go at the top of the 2021 draft. Leiter represents the latest in a long line of products to spawn out of Nashville, Tennessee en route to serious big league expectations. Vanderbilt has produced the likes of David Price, Sonny Gray, Mike Minor, Kyle Wright and Walker Buehler. That’s three top 5 picks and two additional top 20 picks in the last 13 years. That doesn’t even include fellow pitchers Jordan Sheffield, Carson Fulmer, Tyler Beede, Grayson Garvin and Casey Weathers, all first round picks as well in that span. Ten first round arms in 13 years is unthinkable.

Vanderbilt is, by and large, a pitching factory.

2021 figures to add to their prestige as Rocker and Leiter are both projected top five picks.

Leiter comes from a decorated baseball family. His father, Al, won 162 games during his 19-year career. He’d appear in two all-star games and accumulate 40.0 bWAR on his way to a being included on the 2010 final Hall of Fame ballot. He fell short, but the distinction of even being considered speaks volumes.

The younger Leiter has oozed polish and consistency from a very young age. He was squarely on scout’s radars as a junior at Delbarton School in New Jersey. By the time the 2019 MLB Draft rolled around, most had a first round grade on Leiter. Whispers of a $4 million signing bonus ask pushed him into the 20th round and the New York Yankees, but the two sides, as you might expect, couldn’t reach a deal.

From everything I’ve seen and heard, Leiter and his family were dead-set on him getting to campus. His father has done an admirable job staying out of the spotlight considering his proximity to the game and Analyst role at MLB Network. He did, however, provide a little insight 24 hours after draft day via Twitter.

“My son Jack never wavered,” Leiter said. “He always wanted to go to Vanderbilt. His commitment to Vanderbilt was rock solid. I’m proud how he was so resolute and convicted with his choice and decision-making.”

I am so excited to announce my commitment to Vanderbilt University to further my academic and baseball career! #AnchorDown ⚓️⬇️ pic.twitter.com/9RVAJEvRA5

That decision to go to college appears to have paid dividends as he’s now poised to make $6 million or more should he go in the top five.

Now, on to the product itself.

Leiter can throw four pitches, each unique and possessing their own positive characteristics. The command for every pitch, coupled with his mechanics and feel for pitch-ability resemble that of a college upperclassman. He’s polished beyond his years.

The fastball isn’t overpowering sitting primarily 91-93. But again, when you can dot the corners, an average fastball can play a peg up. The heater did touch 96 in 2020, but only once. Leiter has the ability to sink his fastball and let it ride at the top of the zone, though his spin numbers aren’t overpowering. Most of his fastballs spin through the zone at ~2100 RPMs, below average by MLB measures. That number would put Leiter is just the 22nd percentile of big leaguers, so there’s certainly room for improvement in that regard.

That being said, the characteristics on his fastball are sublime. Leiter averages 10.1 inches of vertical movement on the pitch, with 4.5 inches of run. It almost mirrors Rocker’s fastball, save an inch of horizontal tilt. What Leiter lacks in velocity compared to Rocker, he makes up for with his combination of “stuff” and command. Those types of figures on a fastball with a 2100 spin rate suggests he has nearly perfect spin efficiency out of the hand. Moreover, the six-and-a-half feet of extension he gets for his 6-foot frame is also above average and akin to Rocker’s ability to get downhill.

The fastball is pretty comfortable a 55 offering, and depending on the orientation of the pitch on any given day, it could be plus. If he adds a few ticks of velo, we’re talking about a potential plus-plus offering. Put simply, if Leiter enters 2021 throwing 94-95 on a more consistent basis, there’s going to be a groundswell of support for him to go 1.1.

The second offering in his bag of tricks is the curveball, and it’s a good one.

Leiter has relied heavily on his curveball since arriving at Vanderbilt, and for good reason. The curveball can be an out pitch or a get-me-over strike one with knee-buckling break. It can get loopy at times, but it’s tighter than the heavily acclaimed bender that former Louisville southpaw Reid Detmers offers. The pitch sweeps from right-to-left at roughly 2300 RPMs, again, a below average figure. Leiter clearly relies on spin efficiency and mechanics to get the most out of his current stuff. But he’s about as good as it gets in those areas.

The curveball has almost 6 inches of horizontal tilt with close to 9 inches of vertical movement. This would be one of the better curveballs in baseball right now, similar to that of Tampa Bay Rays reliever Nick Anderson, though admittedly thrown softer.

Jack Leiter is going to be a problem (via @PitchingNinja) pic.twitter.com/0U3hvezzP2

At just 74 miles per hour, the bender has an ideal speed differential from his other offerings, and represents a great option as a get-ahead pitch. Curveballs can be a bit divisive in scouting circles. From this chair, it’s another definitive above average offering that flashes plus on most nights.

Leiter’s third offering may top his Uncle Charlie, especially as it pertains to being a punch-out pitch at the next level. The slider is awfully impressive, and again draws very high marks for command. It’s another pitch that sits in the 2200 RPM range, but as Leiter has shown, his ability to consistently repeat his mechanics and generate optimal spin efficiency creates impressive results.

The slider is a much firmer pitch than his curveball generally sitting in the 82mph range. It’s much more of a sweeping offering than Rocker’s gyro-diving slider. Leiter creates 4.5 inches of horizontal movement on the pitch, as well as some vertical tilt. The pitch tunnels very well with his fastball and stays on plane pretty late into the zone. It’s by no means a “wipeout” slider as is thrown around these days, but it’s a very good pitch and amplified by his ability to punch the black.

Jack Leiter gets a lot of love for his fastball/curveball combination, but don't sleep on the slider.

While his changeup is arguably his preferred fourth offering, he has shown feel for it. When you’re pitching against the likes of South Alabama and Evansville, no offense to either school, you don’t need to rip off the entire arsenal, especially if you’re looking to save a little fun for SEC competition later in the year. Unfortunately, as we know by now, almost all of those SEC games never took place due to the shutdown.

The changeup fades and tumbles like you’d want a changeup to do. It gets roughly 3 inches of fade and similar drop. Good, not great. His feel for the pitch and track record of throwing it in high school makes it comfortable to grade out as average, but until we see more of it, it’s hard to warrant anything higher right now.

That being said, as the tweet above exclaims, there’s reason to believe Leiter has four 55-grade pitches. For reference, MLB.com’s Top 100 prospects has just one right-handed pitcher that grades out 55+ on four separate offerings — Houston’s Forrest Whitley. After a tumultuous 2019, even that might be up for debate.

Beyond the pitches, Leiter is revered for his temperament and operation on the mound. The mechanics are clean, repeatable, and have shown the ability to work close to 100 pitches. He has a bulldog demeanor and seems to take charge of the moment and control the at-bat.

The one true knock on Leiter at this stage is his size. At just 6-foot-1, 195 pounds, Leiter isn’t built like a traditional rotation anchor. There’s not a ton of projectable velocity left in the frame. He already has a very quick arm, so it remains to be seen if much additional strength can get him to a consistent 94-95 on the mound. Since the shutdown, Leiter has touched 95-96 in several bullpens, but how those translate to game day is always the question. As it stands, he’s an awfully good bet to reach his mid-rotation floor, but his ceiling is the question.

His Vandy predecessors Gray and Buehler should help his case for future upside. Buehler was largely 90-96 for the Commodores before taking a step forward in his first two years of pro ball touching 99 and 100 a number of occasions. He now sits 95-98 in games regularly. Buehler is just 6-foot-2, 185 pounds.

Both guys have settled in as #1 or #2s for their respective big league clubs. There’s no reason to believe Leiter, barring injury, can’t/won’t do the same.

Let the debate begin. We have 10 months until the 2021 Draft. Rocker or Leiter? Leiter or Rocker? As we know, things can change — they changed in 2020 with Emerson Hancock. That being said, the narrative is reasonably cut and dry at this time. If the Mariners find themselves in a position to draft inside the top three, given their affinity for college arms, you very well may find a Commodore on the team’s roster next summer.

The Seattle Mariners have never drafted and signed a pitcher from Vanderbilt. If I were a betting man, there’s reasonable odds that changes in 2021.