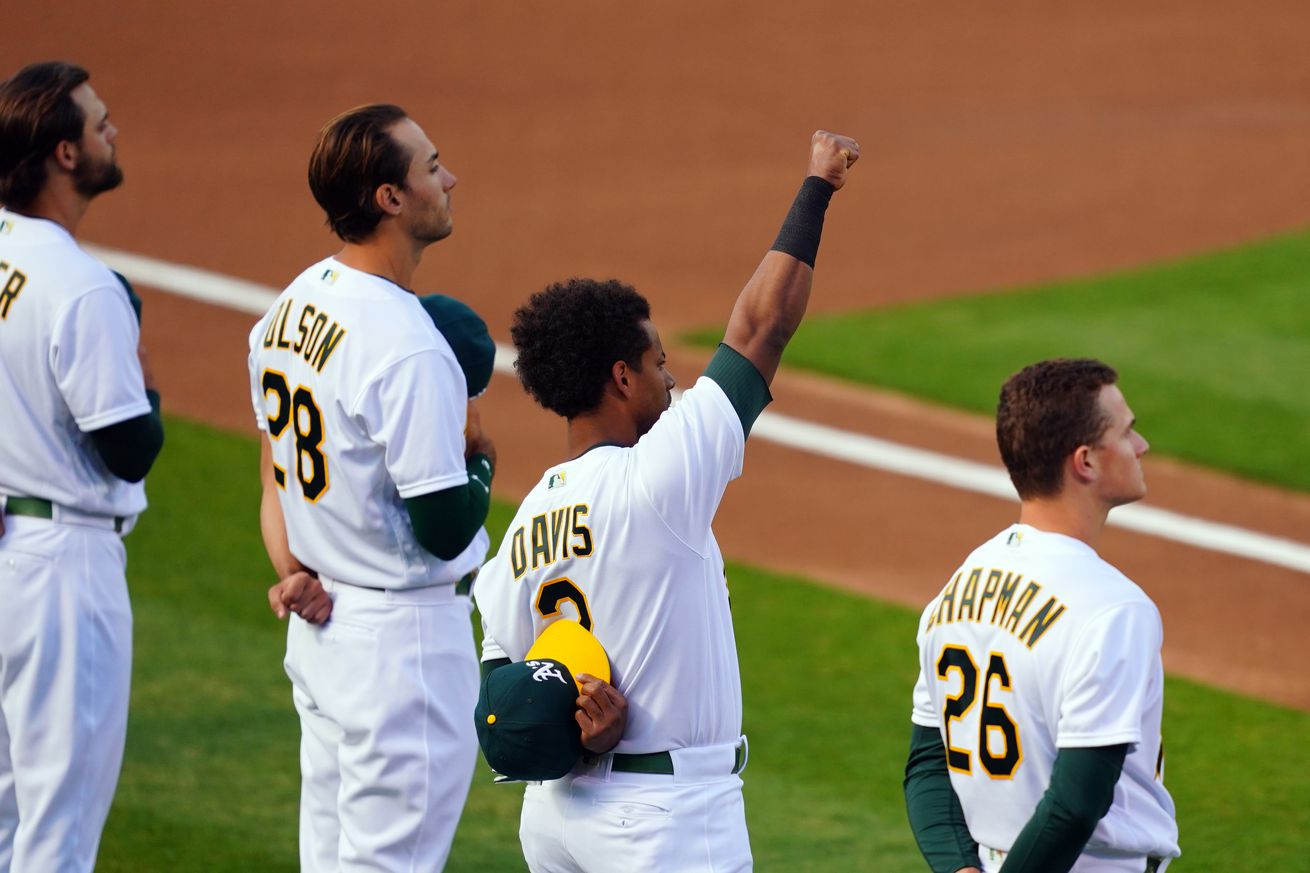 Miss out on the the first weekend of baseball? We’ve got you covered.

The 2020 MLB season began over the weekend, and there was simply too much stuff to fit in one Elephant Rumblings post. An overflow edition is necessary for such an occasion, and today we’ll use it to look back on the Oakland A’s opening weekend. If you had to miss any of the action, we’ve got you covered.

The A’s hosted the Los Angeles Angels for three games at the Coliseum, and they’re playing a fourth on Monday before moving on. Overall, Oakland won two of the three contests, dropping only the Saturday affair.

On Friday, the A’s put together perhaps the best Opening Day in Oakland history. After coming slow out the gate, Ramon Laureano sparked the lineup with some clutch extra-base hits, and the game went to extra innings — triggering the first-ever use of the new (and temporary, for now) rule putting an automatic runner on second base to begin the 10th frame and beyond. The A’s stranded the Halos’ free runner, but Oakland loaded the bases and got a walk-off grand slam from Matt Olson. It was MLB’s first Opening Day walk-off slam since 1986.

On Saturday, the A’s came out flat and stayed there. They managed only one run, while Sean Manaea started wonderfully for four innings and then got beat up in the 5th. The bright spot was the season debut of Jesus Luzardo, who came out of the bullpen to throw three scoreless frames.

On Sunday, Shohei Ohtani made his return to the MLB mound after missing 2019 to Tommy John surgery. However, he’ll have to wait a bit longer to record his first out, because all six A’s batters he faced reached base. He was knocked out in the 1st inning, with five runs eventually scoring, and the Angels never caught back up. Mark Canha had the big hit against Ohtani, Sean Murphy added a monster dinger later against the bullpen, and Liam Hendriks notched his first save after blowing one on Friday.

Here are all the links, sights, and sounds from last weekend, beginning with the Opening Day pregame ceremony.

A’s and Angels players holding the unity cloth to represent “we are one” in this and all communities pic.twitter.com/64tJH7Yc1o

Video of the unity cloth

#Athletics and #Angels hold a length of black cloth as a message of unity is played over the PA system pic.twitter.com/VQ9lOtuB0p

No A’s kneeled during the national anthem, but Khris Davis and Tony Kemp raised fists

A message from the A’s Players: pic.twitter.com/y4QOgoqwOr

"I want a long flight, a legendary one"- This baseball#RootedInOakland pic.twitter.com/4ppqVAvquc

Murphy goes DEEP for his first homer of the year

Chapman’s dropped foul on Sunday was not ruled an error

Because of the sun, it's ruled a "no play"

KD tipping his cap to all the cutouts in the stands pic.twitter.com/zOw7JnD2jr

We have our first “catch” by a cardboard cutout!

Great catch! Congrats to Richard Lovelady for catching the first foul ball of the season in the 811 Foul Ball Zone! We will be sending you the ball! @Athletics And that is $81.10 for the Oakland A’s Community Fund on behalf of Call 811! ⚾️⚾️⚾️ pic.twitter.com/pNEYA0dotO

Cardboard Charlie-O makes an appearance. (And who are you callin’ a horse??)

Enough horsing around. We have 15 MLB games on today. Baseball is back 15/10 pic.twitter.com/hoFpHTxVzC

And finally, this is great. Bronson Arroyo got one right. (And look for A’s play-by-play radio voice Vince Cotroneo!)