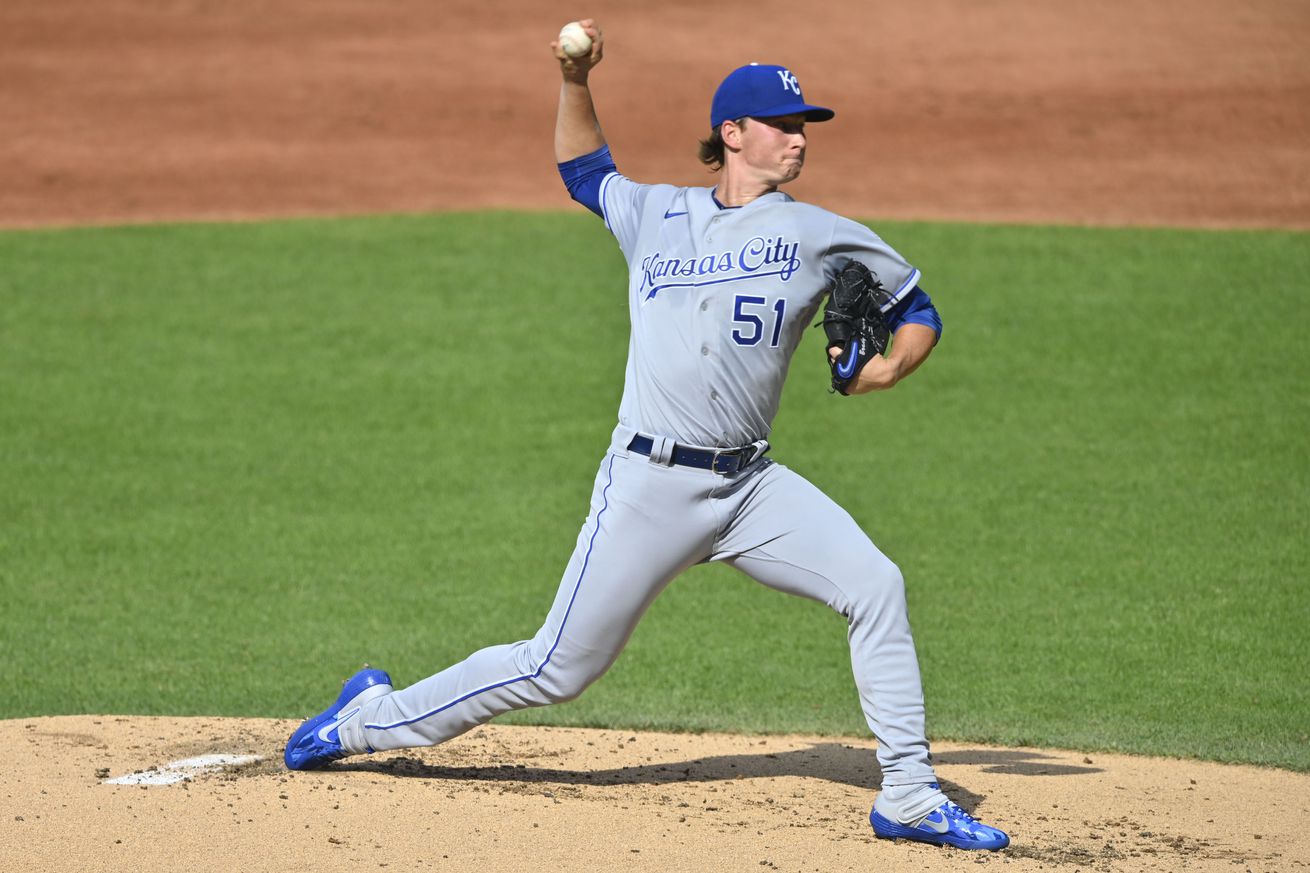 It was as advertised.

It was the most anticipated debut by a starter since Danny Duffy in 2011. Or maybe Yordano Ventura in 2013. Whatever the standard, Brady Singer is now the first graduate of the Royals draft class of 2018. The draft where the Royals loaded up on collegiate arms in an attempt to stock the farm system and accelerate the process. The group has torn through the minors and avoided injury, tantalizing with their collective potential. Individually, other arms from that draft may have a higher ceiling than Singer, but he was deemed the pitcher furthest along in his development and with the highest floor.

Singer went five innings, struck out seven and gave up a couple of runs. It wasn’t an overpowering performance, but one that showed the promise of the right-hander. It was everything the Royals could have hoped for at this point.

And it represents a starting point. A marker. Saturday in Cleveland was when The Process 2.0 truly kicked off. The rest of the arms may be delayed due to the abbreviated season and no minor league schedule, but make no mistake, the clock has started.

As such, Singer’s debut deserves a closer look. Let’s break it down.

Would it have been ultra-surprising if Singer was a little wild in his first inning in The Show? I figured if anything the adrenaline would push his pitches up in the zone. The first pitch he offered to Cesar Hernandez was the wildest, up and out of the zone with a 95 mph fastball. Jitters out of the way, he started to hit his location. Cleveland three switch-hitters to the plate, so all hit from the left side. He worked the fastball down and inside with the slider biting lower.

The fastball showed a lot of life, darting at the aforementioned 95 mph. The slider had plenty of dive to it. It was an effective pitch for him in the first. Of the five he threw, he got two swing and misses. Drilling down even further, the whiffs came on pitches out of the zone. The one slider that was technically a strike was put in play by Hernandez—a ground out to first.

Singer opened the frame with his first career strikeout—coming on a 1-2 slider against Franmil Reyes.

The cluster of fastballs looks a little dangerous here, but the movement and Cleveland’s unfamiliarity with Singer helps him out.

After striking out Reyes, we spot the first appearance of the Singer change in this inning against Daniel Johnson on a 1-1 pitch.

Bradley Zimmer opened the frame with a 107 mph single—the hardest hit ball off Singer. (It should be noted that, per Baseball Savant, no Cleveland hitter recorded a barrel off him.) With the lineup flipped over for the first time, Hernandez lined a single to center on an 0-1 fastball. That exit velocity was 97.4 mph, the third hardest-hit ball of the early evening against Singer. Those singles are represented by the orange inside the strike zone.

The next batter, José Ramirez, went fishing and grounded a run-scoring single to right. It wasn’t a bad pitch. Salvador Perez set up low in the zone, but maybe wanted it a little more outside than it finished. (The orange dot below the zone.)

The key moment of the inning came against Francisco Lindor with runners at the corners. After surrendering three consecutive singles and a run how would the young right-hander compose himself? Singer started up and out of the zone with a fastball, but then worked down the ladder with three consecutive sliders. Lindor looked at the first (a nice selection given the result of the fastball to open the at bat) and then offered at the second and the third, drawing only air on both.

Cleveland grabbed another run on a wild pitch coming on a spiked slider.

Let’s describe this frame as Singer being effectively wild.

He recorded a pair of strikeouts—Reyes again on a perfect 0-2 slider down and out of the zone. Just a great pitch given the count. Singer froze Daniel Johnson on a full-count fastball.

The elevated pitches was likely a cause for concern. Singer was through 59 pitches at this point and the velocity was still there, but he clearly wasn’t finishing his pitches the way he was through the first three frames.

This is just a fascinating chart.

Singer was up with the fastball and down with the slider. This was his most taxing inning pitch count-wise, but when he’s pumping 94 mph heat up in the zone, it’s tough to catch up to. Of the 11 fastballs he threw, he generated three swings and misses—including a 3-2 strikeout against Ramirez on a heater up and away to end his outing. Zimmer hit a fly ball with a recorded exit velocity of 97.7 mph (Zimmer had the two hardest-hit balls of the day against Singer), but likewise that pitch was elevated and Zimmer was underneath it—it had a launch angle 43 degrees.

The slider was similarly effective. Singer enticed three swings and misses on the 10 he offered in the fifth. That includes a second whiff of Perez on a slider that tumbled down and out of the zone.

All in all, it was a stellar debut for Singer. His pitches showed life and he was clearly in control of the moment. Of the 80 pitches he threw, 49 went for strikes. Most impressively, he had 14 swinging strikes, 10 coming off the slider. It was easy to see how both the fastball and slider are 60-grade pitches.

Singer offered only two changeups, both out of the strike zone. That’s a pitch that he’s been working on and will need to develop to be a long-term effective force in the rotation. Manager Mike Matheny mentioned the change in the post-game press conference as he praised the stuff of his young starter.

“He made some incredible pitches with his secondary stuff. Never really got that changeup going to where it was a weapon the way I know it will be, as he’s able to add, but right now with the sinker… to elevate, to throw the slider to both sides of the plate and in the zone and below and know when to stretch… it’s advanced.”

As far as debuts go for Royals starting pitchers, it wasn’t the best ever (that distinction still belongs to Craig Chamberlain in 1979 with a complete game one-run victory against the Detroit Tigers). It wasn’t even the best of the Dayton Moore Era. But that’s not what the club is looking for at this point.

As Matheny said post-game, Singer is still learning and evolving as a young pitcher. The focus at this particular moment is on the debut, but having Singer in the rotation long-term is something the Royals need as they begin to inch further along their rebuild. He’s the first of the heralded 2018 draft class of collegiate arms, but based on this one start, there’s plenty of reason for optimism.

One start down. A whole career to go.