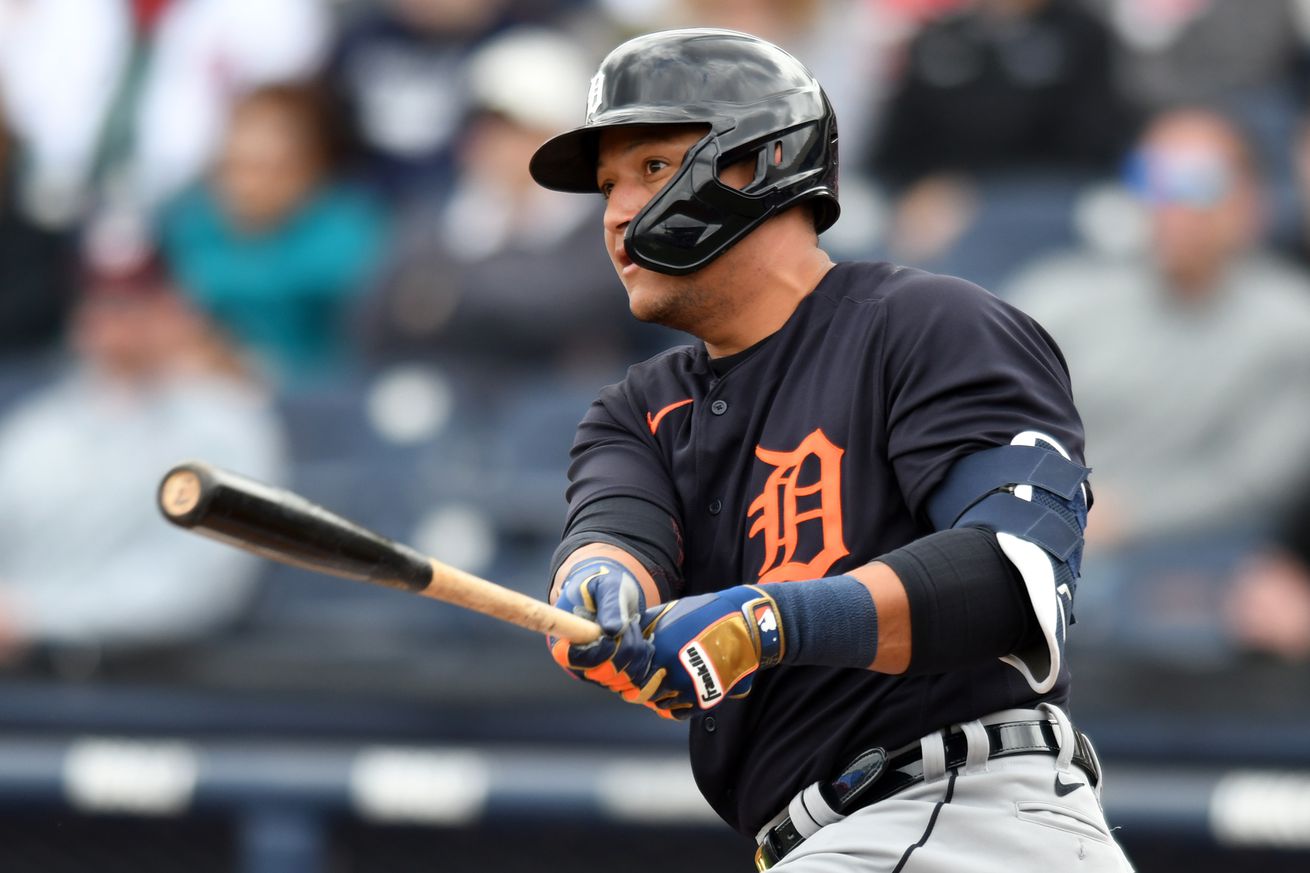 The Tigers should at least call Casey Mize up to pitch against Brady singer to make this somewhat interesting.

The Royals continue their season opening road trip in Detroit to take on the first place Tigers, but they’re only a game back, so this four game series could be a big swing. In all seriousness, neither team is obviously any good, but this season is so weird that if one can win three of four or even sweep, it represents 6.7 percent of the schedule, so it actually could make a bit of a difference. The Tigers, in spite of winning two of three against the Reds, are still not good, though made some very real improvements to a truly awful lineup from 2019. They added Jonathan Schoop and C.J. Cron on the right side of the infield as well as a resurgent Cameron Maybin and Austin Romine behind the plate. All four would have been the best or second best hitter on the team last season, so that’s a big bump for them. They added Ivan Nova and Dario Agrazal to the pitching staff, so the improvements there aren’t quite as obvious.

Note: Remember all stats are still 2019, probably only through this series.

The Royals start the series with Mike Montgomery, who opened the season as one of their only two legitimate starting pitchers, and even that might be a bit of a stretch for him. The Royals seemed to be excited to start him in Detroit based on him going seven innings and striking out 12 in Detroit last year. Of course, they didn’t have the aforementioned right-handed bats they added this offseason and Miguel Cabrera was a shell of himself. He is supposedly healthy now, though he has gotten off to a very rough start to this season. As I said in the last preview before we found out he wasn’t going to start the third game, he struggled in his first start with the Royals, but he was actually okay after. He posted a 4.09 ERA in 12 starts, though there were an awful lot of base runners and not enough strikeouts outside of that Tigers game. Maybe he can recreate that magic and give the Royals a strong start to the series.

Michael Fulmer hasn’t started since he threw five pitches against Cleveland on September 15, 2018 and was pulled with an injury. He’s now back and while he’s only working as an opener, it’s a nice comeback story for the guy who looked like a heck of a return for Yoenis Cespedes when he made 26 excellent starts in 2016. Since then, though, the stuff looked better than the results in 2017 and 2018 before the injury. It’s not yet known who will follow him, and it doesn’t make too much sense to get into much for a guy slated to go an inning or two, but it’s always fun to see a comeback.

As of right now, the Royals Tuesday starter has not yet been announced. Foster Griffin is the only pitcher on the roster who didn’t pitch in the Indians series, but the Royals have been pretty clear they don’t want him following Montgomery because the stuff is too similar. More likely is it will be another bullpen game, perhaps with someone like Josh Staumont or Kyle Zimmer working as an opener as they did in Omaha last season.

The Tigers picked up Dario Agrazal in a blockbuster trade with the Pirates that sent Pittsburgh the vaunted cash considerations. Agrazal made his big league debut last year, appearing in 15 games with a bad but not horrible 4.91 ERA. He didn’t get enough swings and misses, but he also didn’t walk too many. He’s a sinkerballer, with the pitch averaging about 91 MPH and generating almost zero swings and misses. Last year, he allowed a .282 average and .492 SLG on that pitch, so throwing it more than half the time seems like a not-so-great idea. His slider was actually pretty good at generating whiffs, but it got hit hard when batters made contact. He mixes in the occasional changeup and four-seam fastball but is definitely a pitcher any big league offense should be able to find success against, which means the Royals will likely get about three singles over seven innings.

Danny Duffy had a very interesting game against the Indians in his first start of the year, throwing just 65 pitches, but getting a ton of weak contact. He only got three swings and misses, which is a potential problem, but he didn’t walk a single batter, which is a really nice surprise for him. He only made one start all year last year with zero walks. Of course, he also didn’t have a single game with a lower swinging strike rate than he did, so there’s that too. He’s 8-10 with a 4.59 ERA in 139.1 innings in his career against the Tigers, but he’s been kind of dreadful against them the last four years when they’ve been their worst, posting a 5-4 record but a 6.31 ERA, so that’s not what you’d call great. I guess we’ll see how this one goes.

Matthew Boyd is the Tigers ace, but the numbers don’t quite match the newfound reputation. He’s a classic case of thinking someone should be better than he is, which is something we see with Trevor Bauer quite a bit. Last year, Boyd struck out 238 batters in 185.1 innings which is great. But he also had a 4.56 ERA, largely due to 39 home runs allowed. From his first start of June through the end of the year, the guy put up a 5.67 ERA in spite of striking out 150 in 112.2 innings. That’s what happens when you allow 32 homers in that time. If there’s cause for concern, he struck out just two in his five innings in his first start and did give up a home run. It’s just one start, but he was down almost 140 revolutions on his slider in his first start compared to last year, and that’s THE pitch for him. If that doesn’t bounce back, look out. And, just for fun, he’s 5-9 with a 6.46 ERA in 92 career innings against the Royals.

Brady Singer looked awfully good in his first big league start. He gave up the two runs over five innings, but one of them potentially could have been avoided if Maikel Franco had caught a great throw from Whit Merrifield to get a runner at third. He had 14 swinging strikes on 80 pitches, and was generally in control the whole time. His struggles with lefties in the minors that could have been magnified against an Indians team with a lot of lefties was not. Against the Tigers, he’ll get the opportunity to take on a lot of right-handed bats who were 0 for 6 with four strikeouts against him on Saturday. Teams seeing him for the first time might have some struggles against him, and the Tigers will be in that very situation, so I’m hopeful for another very good one for him here.

Ivan Nova has become the guy who teams sign in order to help protect their young arms (and sometimes keep them in the minors to game service time). That’s his role in Detroit as a serviceable veteran who won’t embarrass them, but at 33 now, will not be a part of the long-term future in Detroit. Here’s what you can expect against Nova: a lot of contact, leading to a lot of hits. But he gets the job done reasonably well every season. His ERA+ has between 93 and 102 each of the last four years. His first start was a rough one, walking four batters for the first time since July 17 of last year (against the Royals when he walked five). It was just the fourth time he’d walked four batters in a game since the start of 2016. One thing to note about Nova is that last year, he was bad the first time through the order, allowing a .297/.343/.505 line, but that doesn’t even come close to the .308/.374/.552 line the third time through. Get him early and get him late, if he makes it there.

Even though the Tigers winning percentage is double that of the Royals, these two teams are pretty similar in that they’re both not so good. Comerica plays well to the Royals pitching staff, and the Tigers offense being generally impatient outside of a couple hitters will likely help to limit the issue of walks. In all, it’s hard to predict anything other than a split when you have a slap fight of a series, so that’s what I’m going with here.

EU27 reaffirm solidarity with Greece, Cyprus and call for dialogue with Turkey