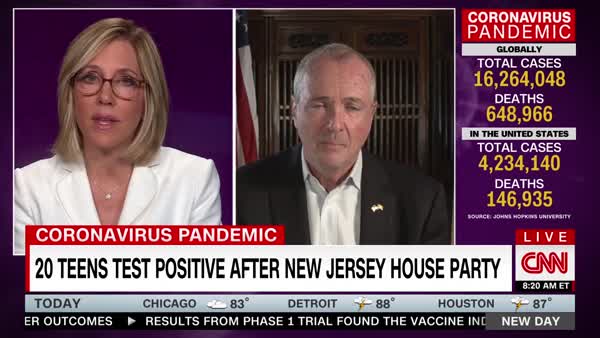 Alysin Camerota had NJ Gov. Phil Murphy on this morning to talk about the proposed Republican stimulus bill.

"It sounds like Republicans have reached an agreement with the White House but it doesn't include what you have been clamoring for and that is more assistance for states. So now what?" she said.

"I don't know what country they're looking at, frankly. This isn't a blue state issue, it isn't a legacy state issue, it's an American issue. States red and blue are getting crushed. Our expenses are skyrocketing, for obvious reasons, to deal with this pandemic, to deal with unemployed folks, to deal with small businesses that have been crushed. Our revenues have fallen off the table. The one smart thing we can do as a country right now is to inject a lot of cash into states to keep front-line workers employed, to keep those services up and running. It's unfathomable that they would have a bill that does not include that.

"I spoke with Speaker Pelosi yesterday and she is in agreement with that. As you know, the House HEROES Act includes a big slug for states. That's what's got to be the end here. we've got to get to that end point and get there sooner."

Camerota asked if Trump agreed with him when they spoke.

"I can't speak for the president, but we made the case forcefully. With him, with the vice president, with his team that it's good for all of us. It's good for America," the governor said.