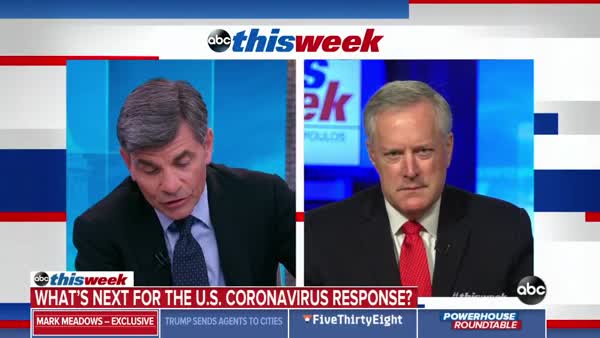 The White House and their Republican enablers in Congress are refusing to extend the $600 a week unemployment benefit in the new stimulus package, claiming people are "refusing to work" because they never had it so good.

There is only one way to look at this insane push by White House's refusal to aid all workers: they are trying to force Americans to go out, possibly get infected, get very sick, and die -- because the Trump administration wants to kick-start the economy at the expense of human life to help his reelection chances.

The constant theme that's being promoted by these cretins is that low-wage earners are making too much from the relief package to ever look for a job again.

On Sunday's ABC's This Week, The White House Chief of Staff Mark Meadows shot down the idea of continuing a $600 a week unemployment benefit with this lame excuse.

“The original unemployment benefits actually paid people to stay home, and actually a lot of people got more money staying at home than they would going back to work,” Mr. Meadows said on Sunday. “So the president has been very clear, our Republican senators have been very clear, we’re not going to extend that provision.”

Texas Senator Ted Cruz attacked the idea of extending these benefits in roughly the same way.

Coronavirus live news: Covid-19 may have been in New Zealand city for 'weeks'; Russia vaccine due in fortnight