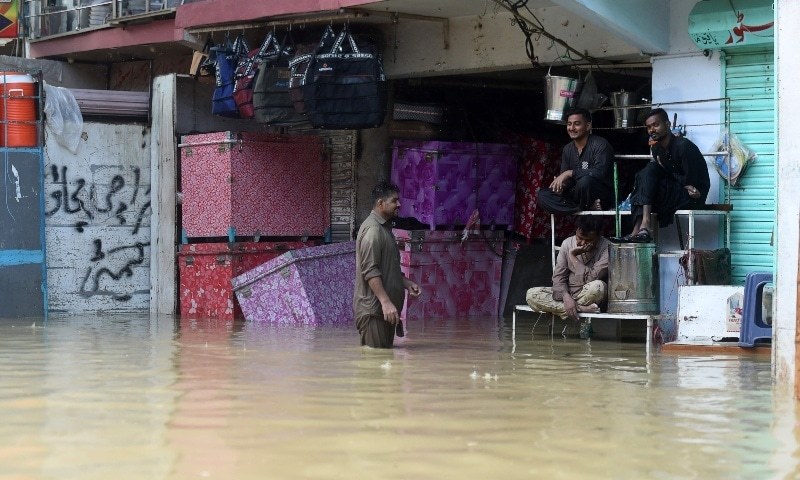 At least three people lost their lives as the second straight day of moderate to heavy rain turned many roads in Karachi into rivers on Monday, with the Sindh government showing helplessness in the face of "natural calamities" and saying the situation "could have been worse" had it not been for its efforts.

Residents took to social media to vent their anger about the now all-too-familiar devastation caused by the showers and shared videos that showed rainwater mixed with sewage surging through narrow alleys, people using boats to cross roads and cars floating away on flooded roads as if they were made of plastic.

Yet another video showed volunteers from the Al-Khidmat Foundation rescuing a group of distressed young girls from a madressah in Orangi Town, located on a backstreet where several feet of rainwater had accumulated.

According to the Met Office, Karachi on Monday received a maximum 34mm of rain in Nazimabad, University Road/Jauhar (10.2mm), North Karachi (8.8mm), Karachi MOS (1.8mm), Jinnah Terminal (0.8mm), Surjani (0.4mm). Many other areas including Saddar, Landhi and Gulshan-i-Hadeed did not receive any rain.

The three people who died all lost their lives due to electrocution, officials said.

Two labourers were electrocuted in Mochko area the evening. Station House Officer Wasim Ahmed said heavy rain had created a pond inside Al-Badar Godown, which deals with the crushing of stones, located on Suparco Road. Four labourers were trying to install a suction motor to remove rainwater when they suffered an electric shock. Two of them died while the other two suffered a minor shock. The bodies were shifted to Dr Ruth Pfau Civil Hospital Karachi to fulfil legal formalities.

In another incident, a 45-year-old man was electrocuted in Orangi Town's Sector 11-1/2 while trying to turn on a motor, according to Pakistan Bazaar SHO Iqbal Husain Tunio.

On Sunday, at least five people, including two children, had died in various rain-related incidents in the metropolis.

On a visit to different areas of the city, Sindh Minister for Information and Local Government Nasir Hussain Shah appeared to defend the provincial government's efforts, saying torrential rainfall manifests itself in the form of a "natural calamity", which he said "no human being has control over".

While conceding that the situation is "not 100 per cent", Shah claimed that the Sindh government has been implementing emergency measures for the last several months under a "comprehensive and integrated policy".

"In today's torrential rain, while the ministers of the Sindh government have been continuously serving the people since last night, some evil elements are merely slandering our character on their Twitter accounts and social media pages," Shah was quoting as saying in a statement.

"We have no hesitation in saying that if the Sindh government had not taken timely steps to clean storm-water drains, the situation could have been even worse," he added.

He appealed to the people not to leave their homes unnecessarily and stay away from electricity poles.

According to the statement, Shah inspected the cleaning process of all storm-water drains of the city including in Nazimabad, Liaquatabad, Surjani, Gulbahar, Orangi Town, New Karachi and North Nazimabad. He directed workers to make the relief activities "more effective and efficient".

After Pakistan cricket icon Wasim Akram in a tweet expressed sadness at the sight of Karachi "underwater", Shah early on Monday invited him to accompany the minister and inspect "how water has been drained from all roads".

"I’m sure that if you are sincere then you will definitely go and if you’ve tweeted on hearsay then there is no one more irresponsible than you because you've disappointed millions of people in Sindh," Shah said in his reply to Akram.

Amidst strong criticism of the Sindh government for not having prepared enough for the heavy rains, Bakhtawar Bhutto-Zardari, sister of PPP chairperson Bilawal Bhutto-Zardari, took to Twitter to suggest that roads in cities across the world get inundated during heavy rainfall. She claimed that "Karachi experienced 86mm rain in 2 hours" on Sunday.

Her sister Aseefa Bhutto-Zardari, meanwhile, claimed that Karachi's annual rainfall is 174.6mm but it had received 153mm during the last 40 hours — which she said was "90 per cent of a year’s rain in 2 days".

However, Met department data shows that Karachi received a maximum of 120.2mm rain during the last two days.

Talking to Dawn.com, Karachi weatherman Sardar Sarfaraz said Karachi's 30-year monsoon average is 132mm of rain while the heaviest rainfall ever recorded in 24 hours in the city was around 142mm.

He confirmed that the city received a maximum of 86mm of rain on Sunday that lasted around 2-2.5 hours.

He said although rain above 80mm was not a huge amount, it was more than that afforded by the infrastructure of Karachi, which "gets submerged even with 30-40mm of rain".

Meanwhile, the K-Electric (KE) in a statement said no unscheduled load-shedding is being carried out in any part of Karachi. It claimed that "segmented load-shed" carried out to address the issue of power theft and load-management, which is on account of power shortfall, follows a schedule which is notified to registered customers via SMS and through the KE website.