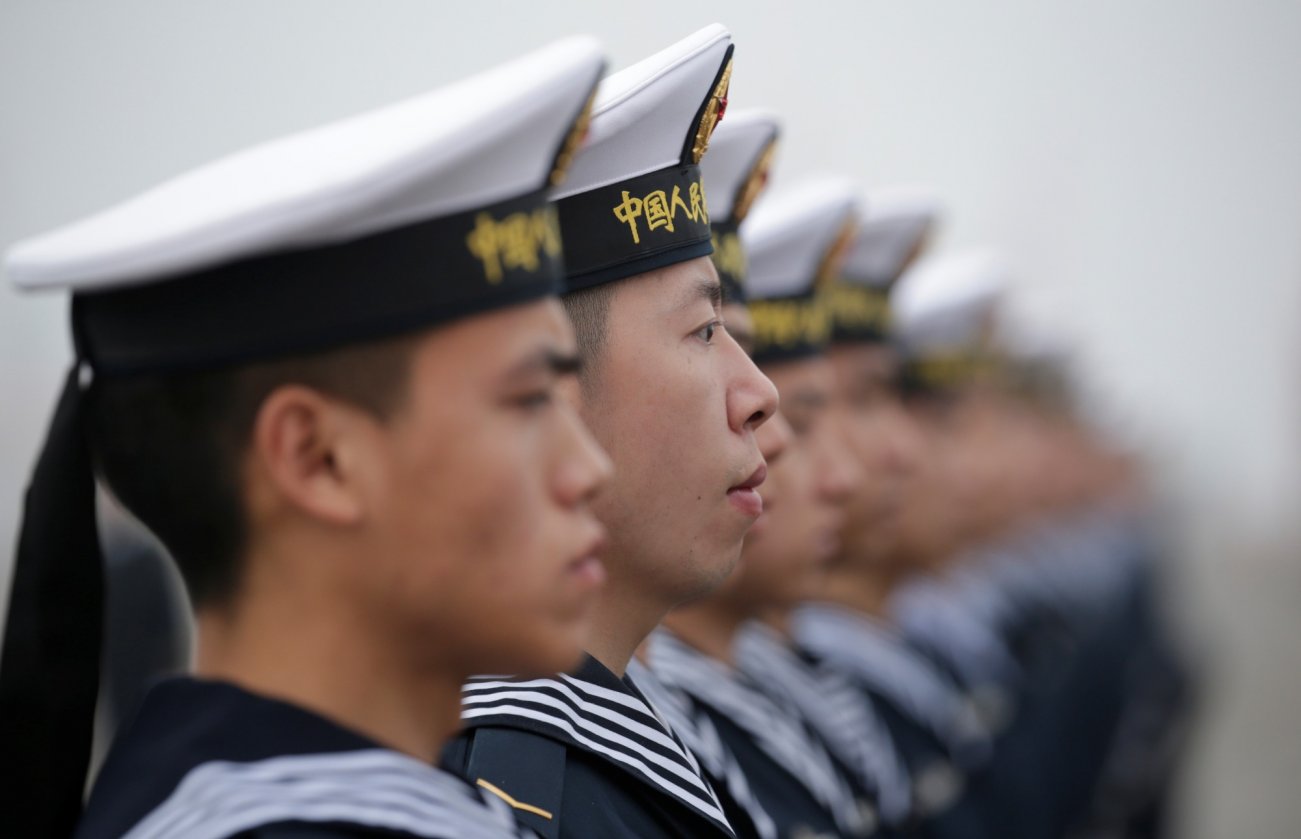 China does not want to repeat history.

Here's What You Need To Remember: A century of humiliation has taught Chinese planners that to allow military forces to be able to approach the coast and be able to build up forces for a possible attack invites strategic weakness and possible subjugation by foreign powers.

Over several years in this publication, I have been exploring the dynamics of the budding U.S.-China security dilemma—a high-tech drama pitting anti-access/area-denial (A2/AD) against what we used to refer to as Air-Sea Battle (ASB)—and have offered several different ways to lessen the possibility of such a dynamic from becoming cemented into the Asia-Pacific’s security architecture. However, China’s development and implementation of A2/AD clearly has various origins. One such origin that deserves to be explored is the “historical nightmare” of China’s subjugation at the hands of various colonial and Asian powers.

In many respects, China is trying to solve a centuries-old problem that never went away: how to defeat in battle military forces that are at least in a symmetrical sense superior to its own and will be for some time to come. If we alter our perspective and take a much longer view of Beijing’s own military obsolescence, a strategy that emphasizes anti-access makes tremendous sense. According to Admiral Wu Shengli, former commander of the PLA Navy, “in China’s modern history, imperialist and colonists initiated more than 470 invasions of China, including 84 large ones, from the sea.” If China’s military were to deter or halt the deployment of superior military forces into areas of Chinese territory or areas Beijing perceives as a core interest, another period of what leaders in China might see as a new form of subjugation could theoretically be avoided. A2/AD allows Beijing to compete with the United States asymmetrically—an important point when one thinks through how many years away China is from competing with America ship for ship or plane for plane.

(Recommended: How America Could Go to War with Iran)

The following serves as an account of what many Chinese consider their own historical nightmare at the hands of foreign forces and why A2/AD would protect China from being subjugated yet again.

There are several events in Chinese history that mainland scholars, politicians and academics point to that weakened the collective power of the Chinese nation and diminished its global standing for generations. Indeed, Chinese strategic planners are keenly aware they have missed multiple “revolutions” in military affairs looking back several centuries—a driving factor in China’s subjugation by the West and other Asian powers. Critical transitions from cold-weapon warfare (knives or blunt striking instruments) to hot-weapon warfare (such as guns and firepower) and from hot-weapon warfare to mechanized warfare (tanks, armored naval vessels, airplanes and so on) were lost opportunities to transform the military establishment into a modern fighting force.

The consequences were shocking. When well-armed Western powers forced their way into China two centuries ago, the Chinese were defenseless, thanks to obsolete technology. When Western powers developed mechanized weapons during and after World War II, China was in the midst of internal turmoil and suffered from foreign invasion (i.e., the Chinese Civil War and Japanese invasion); it did not have the capacity to keep up with the devel­opments of new military technology.

Numerous current Chinese scholars speak of China’s “century of humiliation” or subjugation by various powers that led, according to their line of argument, to the loss of China's great-power status, loss of territory, and in many respects, national sovereignty. Defeat on the battlefield marked the beginning of this century of loss and humiliation. The first major military loss at the hands of Western powers that had wide-ranging repercussions for China and large parts of the Asia-Pacific was its defeat at the hands of the British during the First Opium War (1839-1842). As scholar Richard Harris explained: “The Chinese have one very broad generalization about their own history: they think in terms of ‘up to the Opium war’ and ‘after the Opium war’; in other words, a century of humiliation and weakness to be expunged.”

(Recommended: Japan's Master Plan to Defeat China in a War)

The consequences of the conflict—China’s crushing defeat—were felt far and wide. Beijing’s geostrategic position in Asia was weakened dramatically. China’s military was crushed in a series of defeats by a vastly smaller, but technologically superior, British force. Chinese military technology, tactics and strategy were not on par with the West’s. This defeat sparked the first of what has been referred to as the “unequal treaties.” Five ports were opened to foreign traders, and the British colony at Hong Kong was founded (which would not be returned until 1997).

A second military defeat, this time at the hands of Japan, during the Sino-Japanese War of 1894-1895, also had wide-reaching consequences for Beijing. For several decades, Japan and China had spared in various domains—largely political and diplomatic—over control and influence on the Korean Peninsula. For China, Korea had been a vassal state, having been heavily influenced by Chinese culture. Japan, having undertaken a massive effort to Westernize under the Meiji Restoration, was undertaking efforts to bring Korea under its sphere of influence. Both nations were actively pursuing efforts to modernize their armed forces.

While a larger study of the conflict has been done across many formats and is beyond the scope of this article, the war and its aftermath are of extreme importance. Japan would defeat China convincingly, most importantly at the Battle of the Yalu, an important naval victory. While China had by this time been clearly passed by Western powers and had lost considerable stature and territory, to now be defeated by a neighboring Asian nation-state was even more humiliating. Korea would be declared free of Chinese influence and placed effectively under Japanese control. China would be forced to pay large reparations to Japan. Tokyo would also receive the Liaodong Peninsula, which it was forced to give up, due to Western pressure.

A series of events from the early 1930s until the eventual victory of Mao’s communists in 1949, establishing the People’s Republic of China, would also have a lasting effect on today’s China. While each event is worthy of its own larger study, a narrow focus will be utilized for the purposes of this article.

In 1931, Japan occupied the Chinese territory of Manchuria, creating a puppet state named Manchukuo. In 1937, tensions flared once more when an incident at the Marco Polo Bridge would become the catalyst for full-scale war between China and Japan. Both nations waged a bloody conflict until the end of World War II in 1945. Large sections of Chinese territory were held by Japan, and vast areas of Chinese commerce, industry and farmland were destroyed. China was also in the midst of a civil war from 1927 until 1937, which was halted to combat the Japanese invasion. The civil war resumed in 1946, when China once again suffered severe losses. The Kuomintang or KMT under Chiang Kai-shek fled to Taiwan in 1949. The status of Taiwan to this day has yet to be resolved and is a major factor in Chinese strategic thinking on A2/AD.

China suffered dearly during this period of its history. Countless lives were lost during Japan's invasion and during the civil war. In 1937, China suffered the “Rape of Nanking” among other countless humiliations at the hands of imperial Japanese forces. Even though almost seven decades have passed since the end of World War II, Chinese and Japanese emotions on the subject are considerably heated, serving as a source of tension, which drags on positive bilateral relations.

Such a tumultuous period of Chinese history would have far and wide repercussions on the Chinese people, its collective sense of history and its national psyche. Chinese scholars have debated for several decades the role of such a period when thinking about its place in today’s international order. During this century, China would have to redefine itself, its place in the global order, its place in Asia and its own sense of history. As one scholar notes:

China had to redraw its world map: where it had for millennia sat comfortably at the center of a ring of tributary relationships with neighboring countries, it now found itself a weak competitor in a world of dozens or even hundreds of nation-states. Where Chinese rulers and intellectuals had before had little concept of an international arena, they now had to grapple with the notion that there existed a global system of power relationships whose dynamics – though almost entirely out of China’s control – would determine her fate.

As noted by many analysts (including myself), Chinese A2/AD strategy seeks to target selected perceived weaknesses in U.S. military technology, force structure and strategic doctrine—all while not having to match U.S. forces in all combat domains. At present, even though China possesses the second-largest economy in the world, it still does not have the economic or technological base to challenge America in a symmetrical military matchup. What China can do is devise an asymmetric strategy that is designed to inflict maximum damage on American forces if they were to intervene militarily close to China’s perceived interests along its coasts and out towards the first island chain.

History clearly shows us China has suffered from technological obsolescence on the battlefield for some time—allowing various nations to take advantage. A century of humiliation has taught Chinese planners that to allow military forces to be able to approach the coast and be able to build up forces for a possible attack invites strategic weakness and possible subjugation by foreign powers. Beijing does not feel it has the luxury of time to wait for the development of a first-class military if it were challenged by Washington or another great power. A2/AD solves an age-old problem for China and might just be able to at least deter America and others from possible infringement on China's core interests. And if history is any guide, it seems clear that is exactly the outcome Beijing wants.

This article first appeared in 2017 and is being republished due to reader interest.