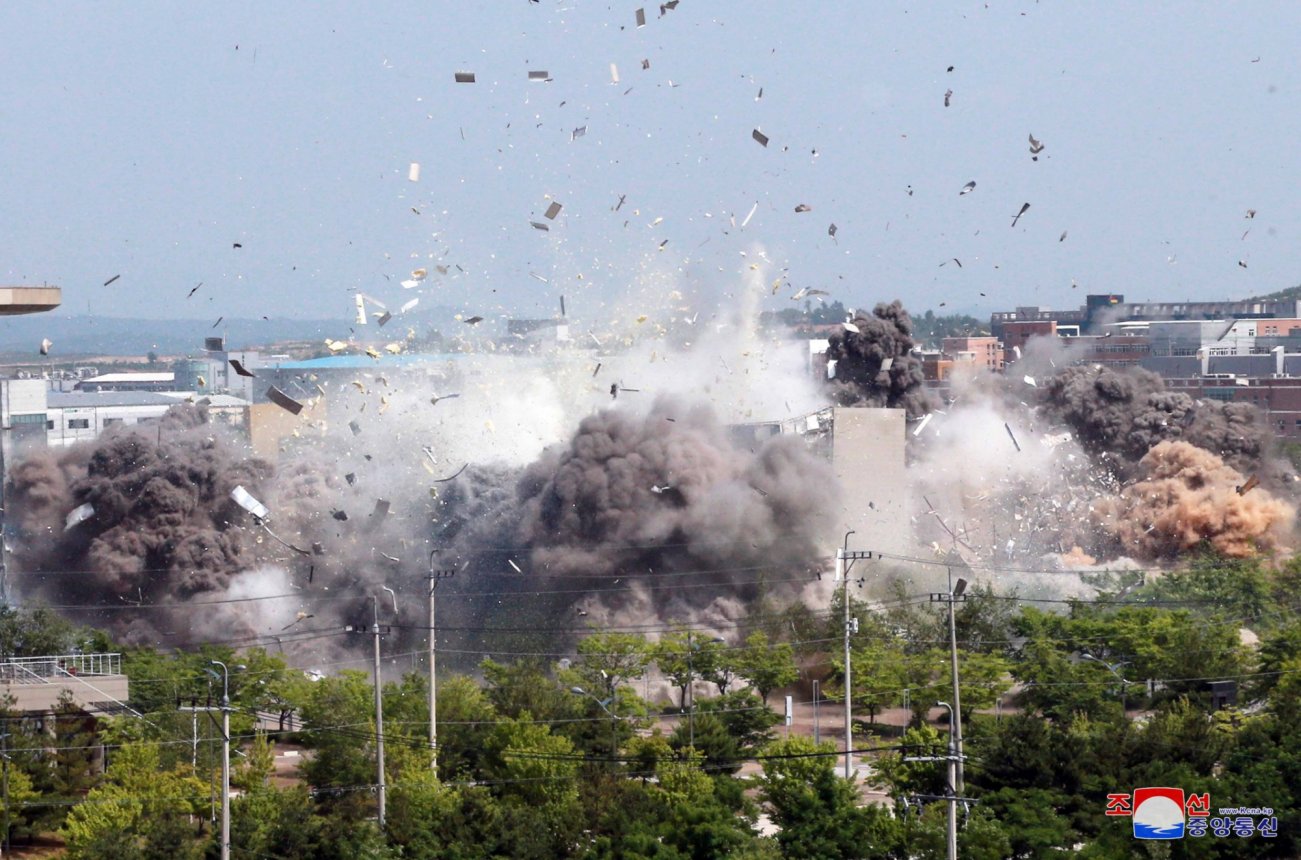 Everything Pyongyang does, it does for a reason.

Here's What You Need To Remember: The common thread driving these provocations—and the nuclear testing, the gulags, the repression of the North Korean people and virtually everything else about the state—is insecurity.

Yes, America Has a ‘Ninja’ Missile

Let’s get one thing out of the way. North Korea is not crazy.

The leadership is a lot of things. Mass murderers, gangsters, terrorists and con artists come to mind. Crazy they are not.

The state operates in an alternative universe in which engaging in shootouts on the high seas, bombarding islands and torpedoing ships—all meant as gestures—make some kind of weird sense.

Everything Pyongyang does, it does for a reason. That includes the occasional killings of foreign sailors and marines.

What follows isn’t a comprehensive account, but it’s the story of North Korea’s deadliest recent attacks, and the curious events that might have triggered Pyongyang into risking all-out war.

The first battle of Yeonpyeong

Seoul sent 16 patrol boats to eject the North Koreans, but the tiny flotilla initially pulled back to avoid a confrontation.

What triggered the attack? A difference of opinion on where the sea boundary between North and South Korea actually lay. Decades before the battle, Washington and Seoul jointly agreed on the Northern Limit Line—a sea border between North and South on the west coast of the Korean peninsula. The NLL extends three miles from the North Korean coastline.

North Korea recognizes a line much farther south in which five islands inhabited by southerners, including Yeonpyeong, are within its territorial waters.

Neither the U.S. nor South Korea consulted North Korea when drawing up the NLL, and Pyongyang has been unhappy about it ever since. In 1999, it began pushing its sea boundary claim, with violence as its method. North Korean patrol vessels and fishing boats began making forays south of the NLL. A clash was inevitable.

The second battle of Yeonpyeong

The North Korean military doesn’t forget its losses—it learns from them and finds ways to strike back.

The South Koreans, outgunned this time, returned fire with 20-millimeter and 30-millimeter cannons. The two boats fought for their lives, many of the crew on PKM-357 badly wounded from a direct 85-millimeter hit to the ship’s cabin. Within minutes, two South Korean Pohang-class corvettes arrived to turn the tide of battle, and the North Korean ships withdrew.

Patrol boat PKM-357 succumbed to damage and sank. South Korean casualties amounted to six killed and 18 wounded. The navy alleged the North Korean patrol boat 684 caught fire and may have sank, with 13 sailors killed and 25 wounded.

For its part, the North Korean navy denied any of casualties or damage to its own forces.

At the time of the attack, South Korea was co-hosting the 2002 FIFA World Cup. It was yet another confirmation of South Korea’s status as a developed nation, a recognition of how far the country had come in the 49 years since the end of the Korean War.

Pyongyang hates it when Seoul looks good internationally. If it can, the regime often plans provocations in such a way to steal the limelight or embarrass its southern neighbor.

The second battle of Yeonpyeong was no different. Handing South Korea a defeat—during the World Cup no less—would show the world who the stronger Korea was. That’s at least how North Korean officials would see it, if they were the rest of the world.

There were also rumors that North Korean leader Kim Jong Il had been plotting revenge for the losses his navy incurred three years earlier.

The sinking of ROKS Cheonan

By far the most deadly attack by North Korea in recent history was the torpedo ambush and sinking of the ROKS Cheonan.

A Pohang-class corvette of the kind that saved the day at the first battle of Yeonpyeong, Cheonan was on patrol off the coast of Baengnyeong Island on March 26, 2010, when the South Korean navy’s Second Fleet Command sent a warning to the ship.

A North Korean submarine and six support ships had disappeared from the port of Nampo.

Submarines is why ships like the Cheonan exist. An anti-submarine corvette, the ship was 289 feet long, displaced 1,200 tons and had a crew of 95 sailors. Cheonan packed a 76-millimeter gun, four Harpoon anti-ship missiles and six Mk.46 anti-submarine torpedoes. Plus depth charges.

Then at 9:22 p.m. local time, the rear of the warship exploded. Within five minutes of the blast, Cheonan broke in half and sank. Forty-six sailors died.

North Korea denied responsibility, but the general consensus among international experts solidified around North Korea being responsible. But why would it sink a corvette? There are two possible reasons.

At the time of the attack, South Korea and the U.S. were holding the annual Foal Eagle and Key Resolve military exercises. North Korea objects to exercises because they strengthen U.S.-South Korean defense cooperation. Attacking a ship such as Cheonan makes the argument that the alliance cannot protect Seoul from attack.

Another theory proposed that Kim Jong Un planned the attack as a way of padding his military resume. Although he is a marshal of the North Korean army and supreme commander of its military, he has no actual military service.

Writing a resume with blood isn’t an unprecedented move in North Korean history. His father similarly masterminded the 1987 bombing of Korean Airlines Flight 858 to give himself credibility in state and military matters.

The shelling of Yeonpyeong Island

In 2010, North Korea again turned its focus toward Yeonpyeong Island. This time with an artillery bombardment.

There were plenty of targets on the tiny island. Yeonpyeong is a mere 2.8 square miles in size, with a civilian population of 1,780 and a garrison of 1,000 South Korean marines.

On November 21, South Korean intelligence detected the movement of a North Korean battalion armed with multiple-rocket launchers to within firing range of Yeonpyeong. The battalion possessed 18 122-millimeter multiple rocket launchers mounted onto trucks, similar to the Soviet Katyusha weapon systems made famous during World War II.

At 2:34 p.m. on Nov. 23, the battalion unleashed a barrage containing an estimated 150 rockets. In military terminology, the shelling was a “time on target” attack, a technique pioneered by the U.S. Army in World War II. In such an attack, the gunners coordinate their shells and rockets so that instead of landing in a steady pattern, they impact all at once.

After a 15-minute pause, a second barrage of 20 rockets again struck the island. Each rocket carried a high-explosive warhead weighing 41 pounds. A fire swept the island, destroying several civilian buildings.

The four working howitzers executed a pre-planned strike on mainland targets. The radar then came back online, and the marines identified the source of the North Korean barrage. The marines shifted targets and began firing on the multiple-rocket launchers.

South Korea fired a total of 80 155-millimeter shells at North Korean positions, but a damage assessment conducted later suggested that none of shells hit their targets.

Why did the North do it? Robert Kelley, a professor at the University of Busan, theorized it was because of all the favorable press South Korea received for hosting the G-20 summit that month in Seoul.

Events such as the summit highlight the huge economic disparity between the two countries. For Pyongyang, that’s enough to begin shelling South Korea.

If all of the above seems a little crazy, then it’s because we’re applying an outsider’s logic to behavior that’s internally logical to a North Korean official.

The common thread driving these provocations—and the nuclear testing, the gulags, the repression of the North Korean people and virtually everything else about the state—is insecurity. Fear of being overthrown from within or invaded from outside.

In short, the leadership is deeply insecure about its own safety. But it understands the language of strength, power and terror—because the leadership sits atop a society ruled by these forces. It doesn’t work as well as the leaders would ideally like, but it works to an extent.

This is not to excuse any of these terrible things, but it’s to say they have their reasons.

In this sense, the North Korean regime is very rational, and their leaders are definitely not crazy. To call the successive Kim regimes crazy is to give up on understanding them—and dealing with them.

This article by Kyle Mizokami originally appeared at War is Boring in 2014 and is being republished due to reader interest.

Premier League betting tips: Willian to score vs Palace, goals galore in Arsenal vs Leicester and Greenwood on target

A Better Fall Is Possible