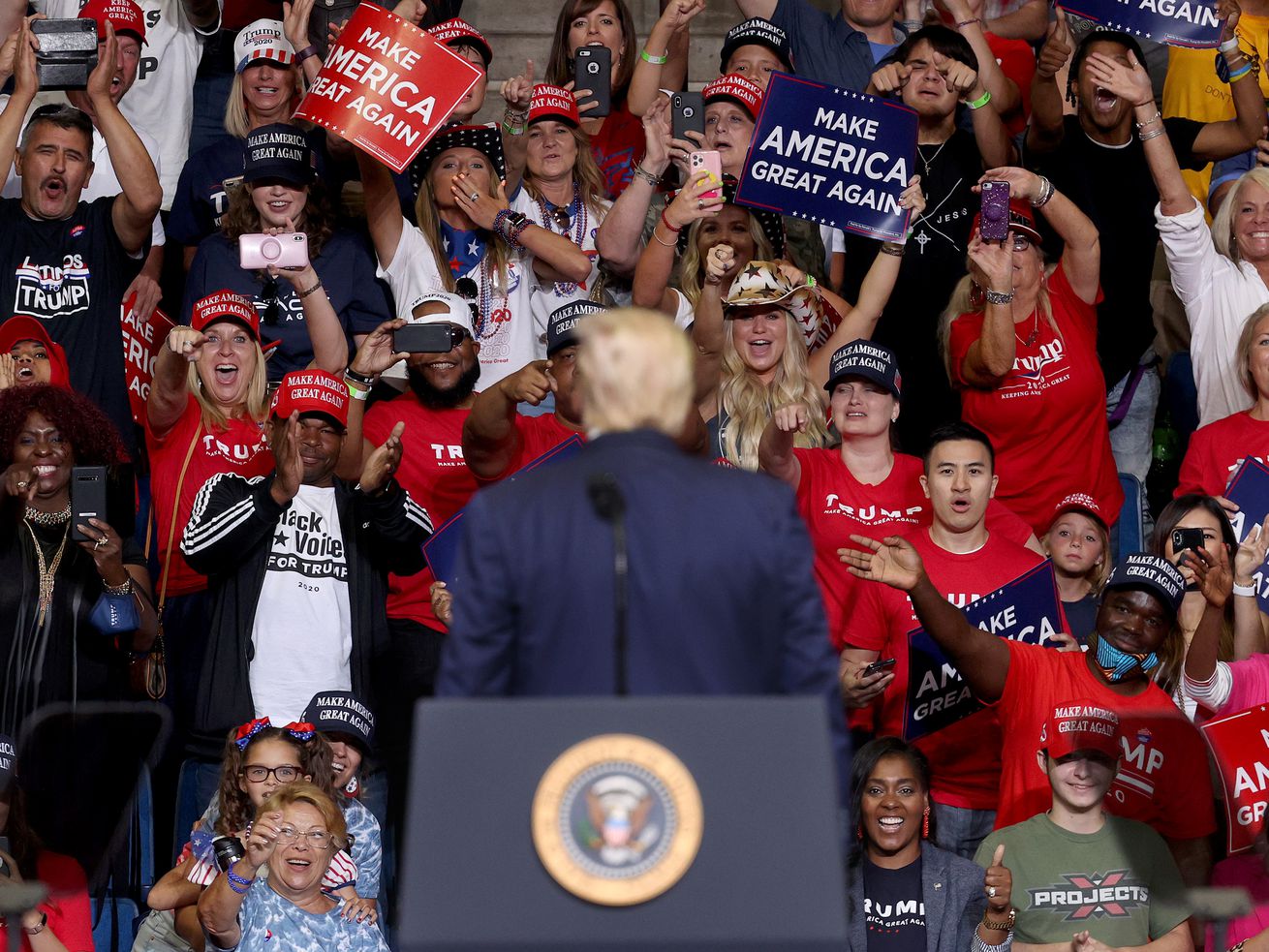 Supporters of US President Donald Trump react as he concludes speaking at a campaign rally at the BOK Center, June 20, 2020, in Tulsa, Oklahoma. | Win McNamee/Getty Images

The president’s rhetoric is seen as fueling a surge in hate incidents toward Asian Americans.

In a rally in Tulsa, Oklahoma, this past weekend, President Donald Trump used the term “kung flu” to describe the coronavirus, one of several racist statements he made during a wide-ranging speech that touched on his administration’s handling of the pandemic.

“By the way, it’s a disease, without question, [that] has more names than any disease in history,” Trump said at the time. “I can name kung flu, I can name 19 different versions of names.”

Since then, Trump’s press secretary Kayleigh McEnany has gone on to defend his use of the term. And Senate Majority Leader Mitch McConnell has been noncommittal: When asked how he and his wife, Transportation Secretary Elaine Chao, felt about Trump’s remarks, McConnell declined to say whether he was comfortable with the president’s rhetoric, instead suggesting that the question should be directed to Chao, who immigrated from Taiwan to the US as a child.

McEnany’s defense of Trump is the same flimsy one he’s been using ever since he began calling the coronavirus the “Chinese virus:” She argued that such names simply associate the illness with its “place of origin,” an effort that even if conducted in good faith goes against World Health Organization guidelines that warn against promoting labels that could stigmatize an entire region.

“The president does not believe it’s offensive to note that the virus came from China,” McEnany said during a briefing on Monday.

Trump’s use of the “Chinese virus” or “kung flu” is, of course, not in good faith and very much about tapping into the same racism and xenophobia he’s long amplified in myriad comments he’s made about people of color. As the Washington Post’s Jose Del Real reported, Trump made several other racist statements during his Tulsa remarks: In his speech, he described racial justice protesters as “thugs” and used a scenario involving a “tough hombre” to illustrate the threat of defunding police.

These statements, as well as references to Mexican immigrants as “rapists” and multiple African nations as “shithole countries,” are among the racist comments he’s used in campaign rallies and presidential remarks over the past four-plus years.

As the country reckons with systemic racism and police brutality, Trump appears as eager as ever to stoke racial divisions, using rhetoric that both contradicts his March claims of wanting to “protect” Asian Americans and directly contributes to hate incidents against members of this group.

Trump’s decision to lean into racist rhetoric — including terminology his own adviser, Kellyanne Conway, has condemned in the past — comes as Asian Americans continue to report hate incidents such as verbal abuse, physical assault, and property damage during the pandemic. As the coronavirus spread around the world, tropes that treat Asians as perpetual foreigners have also resurfaced, fueling racist and hostile anti-Asian sentiment.

Stop AAPI Hate, an organization that’s been tracking self-reported hostile anti-Asian incidents since late March, says it’s received more than 2,100 reports since the project began. Such incidents have included instances of employees getting shunned in the workplace, families being spat on at fast food restaurants, and children getting beaten up by their classmates. The group says it saw a surge in reports after Trump began using rhetoric like the “Chinese virus” and noted that many “anti-China” comments were frequently associated with verbal and physical assaults.

“A White male walked by me and said, ‘you f—king Chinese spread the Coronavirus to this country, you should all leave this country!’” one incident report read.

“A woman sitting at a bus stop was screaming at myself and other Asians that she saw walking,” read another. “She said that we were ‘dirty Chinese,’ that we were trying to take over the US.”

Researchers, too, emphasize that Trump’s rhetoric has mattered in the past: An NBC News report by Kimmy Yam points to a February study, which determined that Trump’s racist comments against Latino Americans “emboldened” others who held similar views to express them.

Trump’s continued use of racist statements about the coronavirus — ultimately trying to deflect blame by pointing out it is foreign-born — comes as he struggles to deal with the fallout of his own handling of the pandemic: Most recently he came under fire for saying he intends to slow down coronavirus testing because doing so would reveal the presence of fewer cases.

“President Trump continues to utilize white supremacist and nationalist views as a means of scapegoating his failures for political gain,” said Manjusha Kulkarni, executive director of the Asian Pacific Policy and Planning Council, in a statement. “Unless we hold him accountable, the discrimination and harassment against Asian Americans will become deeply entrenched, cause unimaginable harm and suffering, and take decades to unwind.”