I would assume big corporations have the funds to hire Top Legal Minds, but what do I know? Maybe I'm just making this assumption because it seems like the sort of thing you should do when you have lots of capital and a plethora of brands to watch over.

Kellogg's -- the manufacturer of Cheez-It snack crackers, along with hundreds of other foodstuffs -- is no stranger to wielding IP law like a defective, factory-second bat. Every so often, its highly paid IP lawyers take a swing with it, but seldom manage to injure anyone but themselves and the company they represent. Kellogg's has tried to assert IP dominance over toucans and Mayan imagery in the past. More recently, it went after an Australian tennis player who branded himself "Special K."

Its latest move is something else entirely. I mean, it's just as dumb but it involves copyright rather than trademarks. And it does involve the Streisand effect, which means the thing it hoped to nuke out of existence with a bogus DMCA takedown is about the only thing people see when they view responses to the Cheez-It Twitter account's tweets.

Back in late April, Cheez-It offered up some free backgrounds for snack fans to use as video chat backgrounds.

Pro-tip: Liven up your video chat with #CheezIt crackers. Download these backgrounds now and let the fun begin. pic.twitter.com/1WHyjwcNQT

We all know what happens when you give the internet a gift. Someone's going to do something inappropriate with it. Twitter user @extremelysquid offered his sincere thanks to Cheez-It for its jpeg gifts by turning its prized cracker into a terrorist. 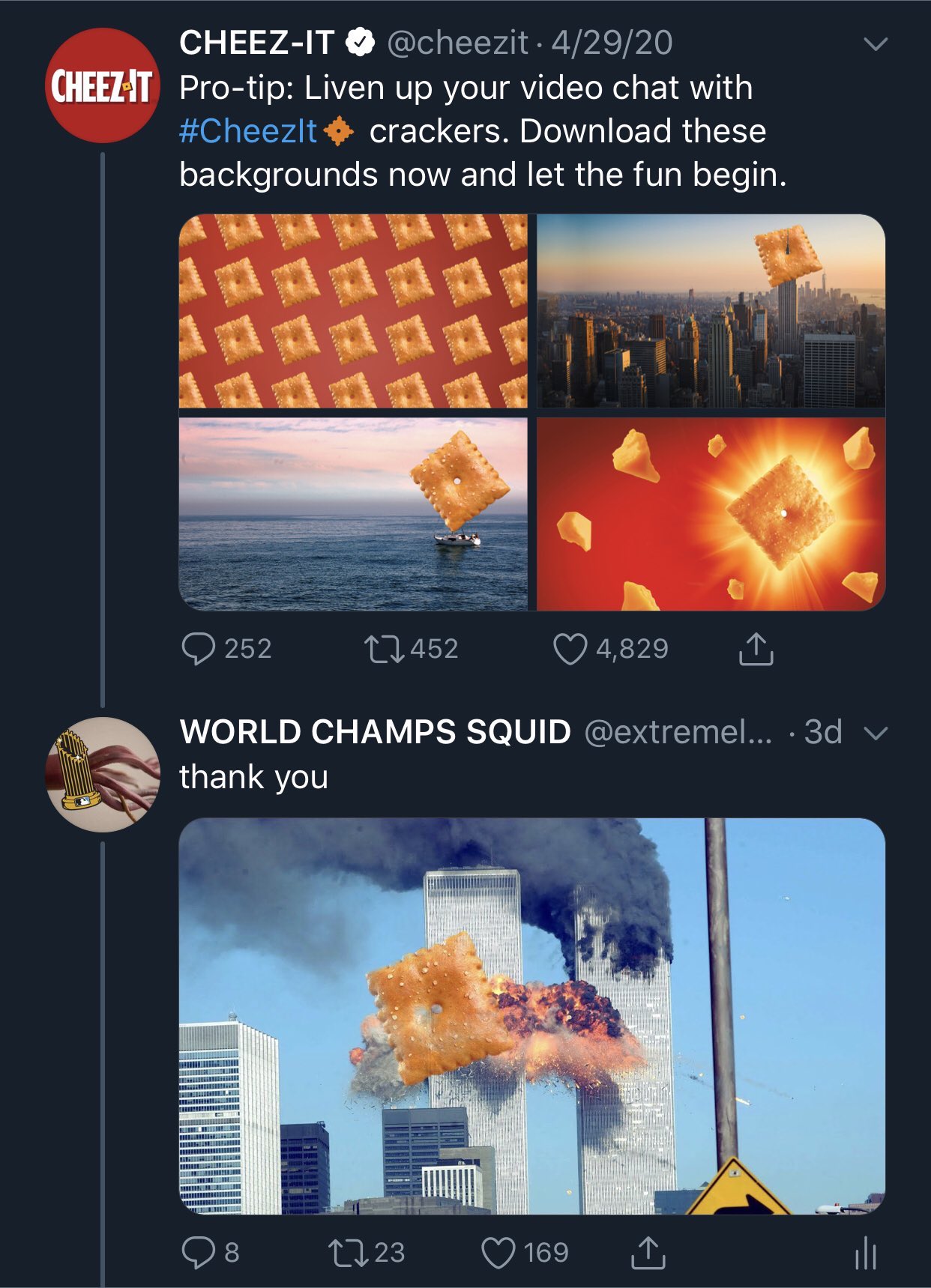 Here it is in all of its non-screenshot glory: 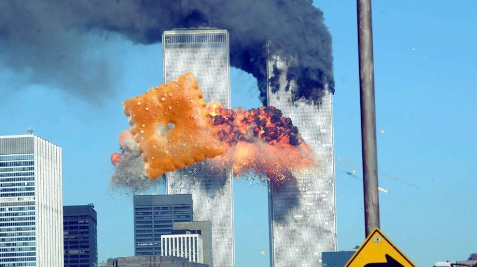 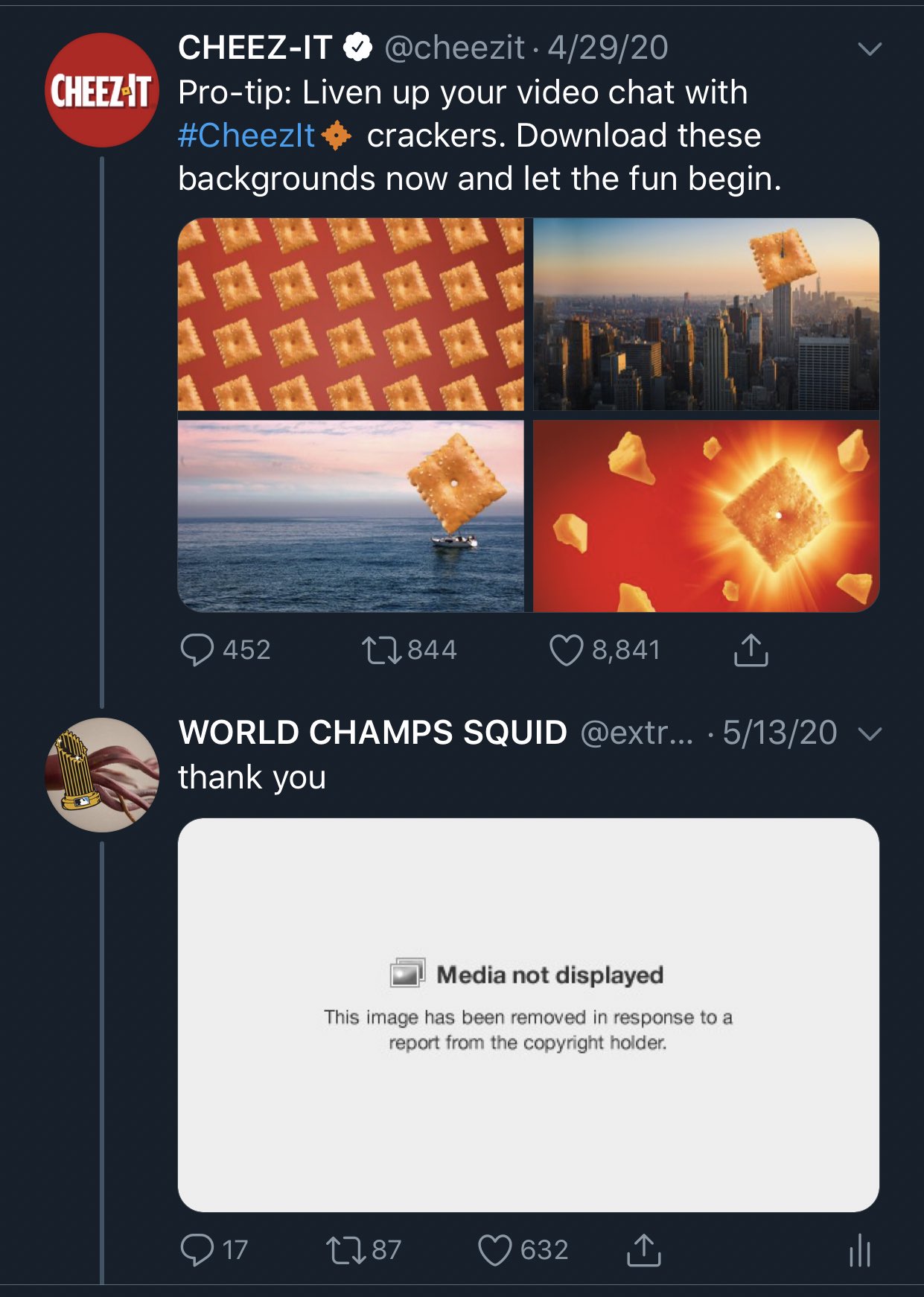 Up at Cheez-It HQ, it was presumably time for celebratory drinks. After all, eradicating a snarky menace with a bogus DMCA notice is the sort of thing that never backfires. Especially when backed with this immaculate legal rationale: 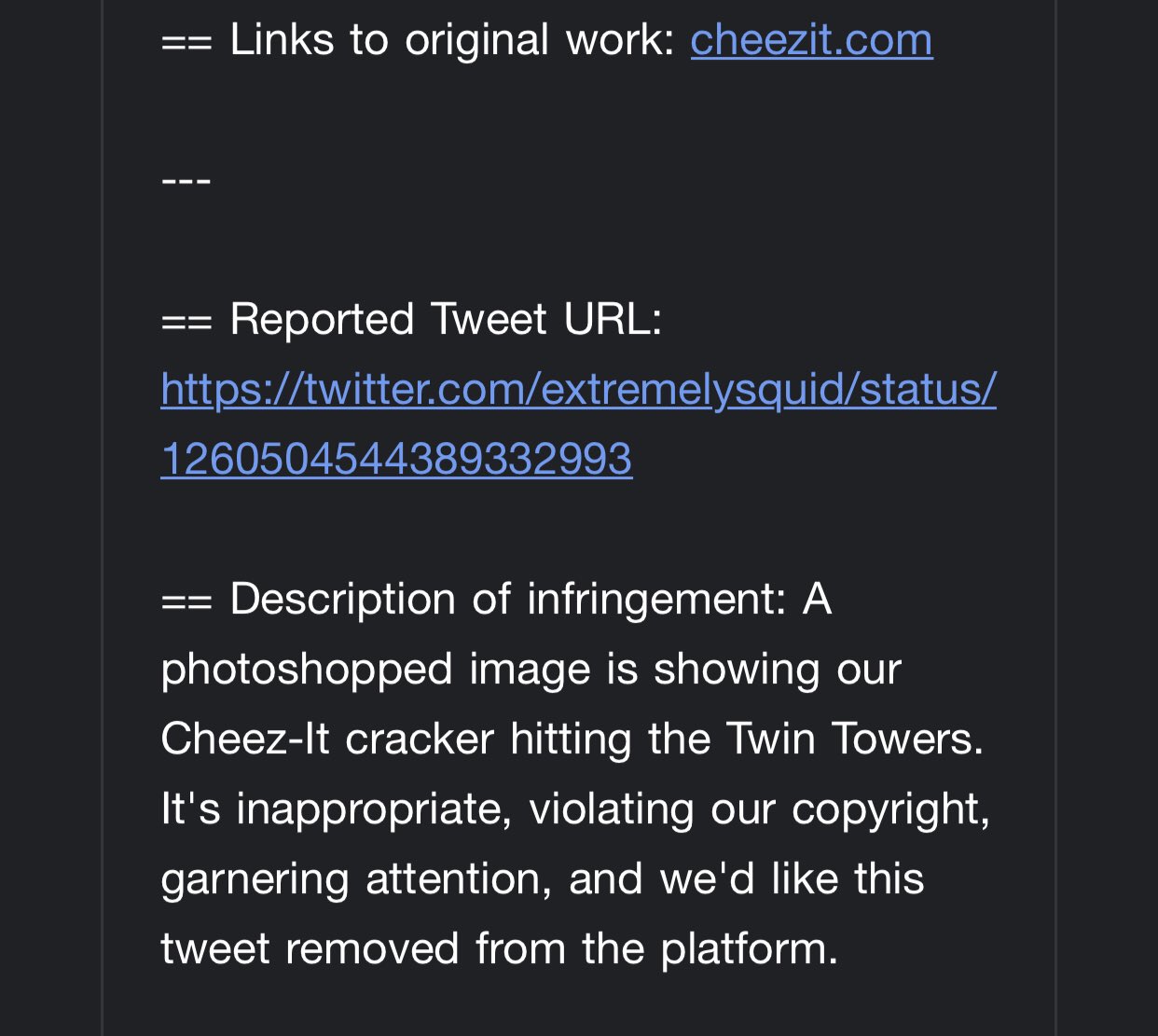 Let me just quote that for those of you who may not be able to see the image. Because it is breathtaking in its stupidity.

Description of infringement: A photoshopped image is showing our Cheez-It cracker hitting the Twin Towers. It's inappropriate, violating our copyright, garnering attention, and we'd like this tweet removed from the platform.

Let's see… even if it was "violating copyright," the rest of this cites things that aren't indicative of infringement or legal reasons for demanding the removal of content. "We don't like it" and "a lot of people are seeing it" are not justifiable reasons for content removal. And it's not infringement. It's transformative use. Cheez-It may not like it, but it doesn't get to nuke content just because it doesn't like it.

Well, actually it does. Extremelysquid's picture was removed by Twitter. But it was replaced by dozens of copies, many of them appearing in replies to Cheez-It's original tweet. And there are arguably worse variations, including the cracker being placed on the Tiananmen Square tank, as a replacement for a swastika at a Nazi rally, as the executioner of a suspected Vietcong member, etc.

Don't ask and you shall still receive. Especially when you've done a dumb thing for even stupider reasons. Chances are if Cheez-It had ignored Extremelysquid's tweet, many others would have done the same. Now its tweets are host to a variety of offensive imagery, all featuring the cracker that some suspect may have participated in the 9/11 attacks.

The Best Glock Gun? That Might Just Be the Glock 19 Gen 4.