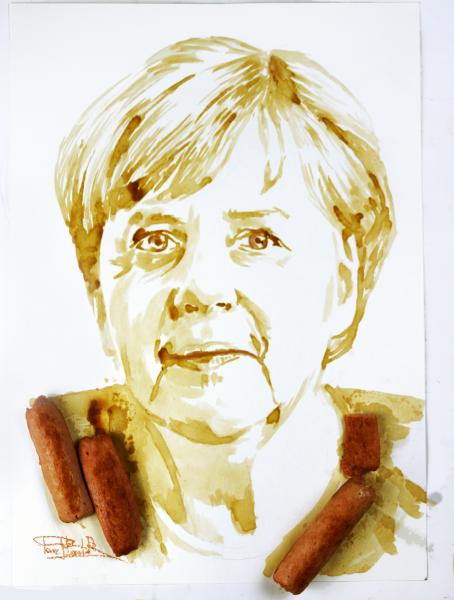 The Ukrainian born artist Pavel Bondar continues to surprise everyone with his absolutely unique and special manner of using different types of food in his works. Recently the collection of the portraits from his unique project “Tasty faces” received new additions of portraits of world leaders which also included a portrait of Angela Merkel.

While trying to show the German chancellor Pavel Bondar decided to use two most famous German products – dark beer and sausages. Though the artist had to put a lot of efforts to create his own “beer paint”.

“I had to boil beer till the moment it had quite think residue”, states Pavel Bondar about the process of his work. “At the end of the process I received something quite resembling watercolor which is easy and convenient to use in my work”.

Recently, Pavel had spent a month in Germany which allowed him to better express the national features of German people.

“Angela’s smile brings me a lot of positive thinking, people like to go on vacations in those regions, like to be active, get together and enjoy life”, says the artist.

While looking at Angela’s portrait you can feel that the artist tried to express her calm, soft and pragmatic individuality.

It is known that the first female German Chancellor leads quite a modest life. Although she is known to be a persistent and confident person. Culinary is amongst her favorite hobbies. Angela Merkel shops for food on her own, loves to bake and participates in culinary shows. She often attends beer festivals, and her favorite type of beer is Spaten accompanied by snack from Bavarian sausages.

It is quite obvious that Pavel Bondar and Angela Merkel have something in common to talk about.

Could FA Cup matches be postponed this weekend due to Covid-19 outbreaks, and will unaffected teams receive a bye?